A three-eyed crow appears to Bran Stark in dreams. It is known by the children of the forest as the last greenseer.[2] In the television adaptation Game of Thrones it is known as the three-eyed raven. 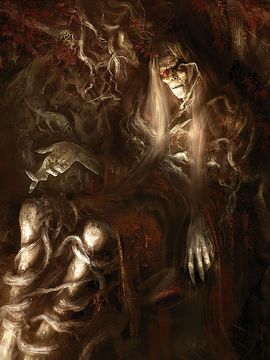 The three-eyed crow - by Marc Simonetti ©

When Bran Stark is in a coma after his fall, a crow appears in his dreams and tells Bran it can teach him to fly. Bran realizes it has three eyes, with the third eye full of a terrible knowledge. The crow guides him out of his coma.[3] Bran later tells Maester Luwin of another dream, in which the three-eyed crow goes with the boy to the crypts of Winterfell, where he speaks with his sad father, Lord Eddard Stark. Bran has the dream before finding out that Eddard has been executed in King's Landing.[4]

While bannermen arrive at Winterfell for the harvest feast, Bran dreams of a weirwood with deep red eyes and a twisted wooden mouth, with the three-eyed crow in its branches.[5] Jojen Reed tells Bran that he dreamed of a winged wolf bound in chains, with a three-eyed crow chipping at its stone chains. Jojen reveals the crow has visited him in dreams since he was a child and that it can be found beyond the Wall.[6]

Bran and his companions—Hodor, Meera, and Jojen Reed—decide to travel north beyond the Wall to find the three-eyed crow, of whom the boy still dreams.[7]

With the assistance of Coldhands, Bran, Hodor, and the Reeds reach the three-eyed crow in a cave in the haunted forest. It is not an actual bird, but a man who says he was once a lord called Brynden.[1] He is a pale, skeletal man in rotted, black clothing in a weirwood throne of tangled roots. His skin is white, aside from a red blotch on his neck and cheek. Brynden has fine, white hair long enough to reach the earthen floor. He is missing one eye, while the other is red. Weirwood roots surround the man and grow through his body, including his leg and his empty eye socket. His voice is slow and dry, as if he had forgotten how to speak.[1] Bran is disappointed that the crow cannot heal his crippled legs, but Brynden promises he will teach Bran how to fly instead.[2]

Brynden teaches Bran about greenseeing and skinchanging.[1] He later decides it is time for Bran to take the next step and has Leaf give Bran a bowl of weirwood paste, made from seeds of weirwood, to eat in order to awaken his greenseer gifts. When Bran sees his father, Eddard, through Winterfell's heart tree, Brynden tells Bran that he is haunted by his own ghosts, a brother that he loved, a brother that he hated, and a woman that he desired, but he knows from experience that you cannot change the past.[1]

Quotes by the three-eyed crow 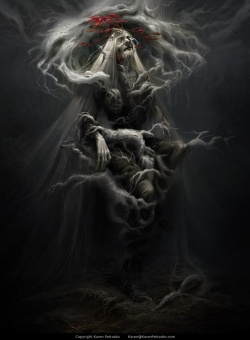 The strongest trees are rooted in the dark places of the earth. Darkness will be your cloak, your shield, your mother's milk. Darkness will make you strong.[1]

—the three-eyed crow, to Bran Stark

Quotes about the three-eyed crow

A face took shape within the hearth. Stannis? she thought, for just a moment . . . but no, these were not his features. A wooden face, corpse white. Was this the enemy? A thousand red eyes floated in the rising flames. He sees me. Beside him, a boy with a wolf's face threw back his head and howled.[8]

—Melisandre, looking into the fire in her chambers at Castle Black

Most of him has gone into the tree ... He has lived beyond his mortal span, and yet he lingers. For us, for you, for the realms of men. Only a little strength remains in his flesh. He has a thousand eyes and one, but there is much to watch. One day you will know.[1]