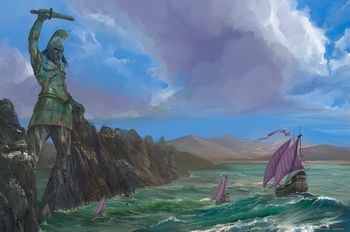 The Titan of Braavos, as depicted by Paulo Puggioni in The World of Ice & Fire

The Titan of Braavos is a massive statue of granite and bronze in the shape of a warrior. It acts as as a fortress and lighthouse guarding the entrance into the lagoon where the Free City of Braavos is located. It is the primary line of defense for Braavos.[1][2]

When seen from the sea for the first time, the Titan is a terrifying sight.[1]

See also: Images of the Titan of Braavos 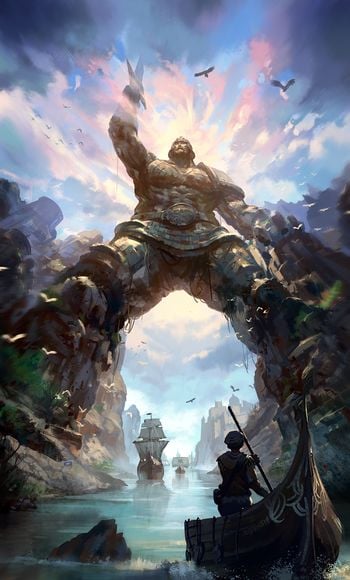 A ship sails under the Titan of Braavos, by zippo514 ©

The feet of the Titan lie on two separate islands, including Sellagoro's Shield,[3] and each foot is set upon a mountain of black granite. The islands are covered in soldier pines and black spruce.[2]

The statue's legs and lower torso, also granite, were originally a natural stone archway.[1] The Titan's hips are encased in an armored skirt of greenish bronze, and arrow slits dot the inside of the statue's thighs. There are murder holes beneath the armored skirt, with soldiers within protected by iron bars.[2] The watchmen can drop stones and pots of burning pitch onto the decks of enemy ships.[1]

Above the waist, the bronze colossus is filled with halls and chambers,[1] its breastplate punctured with more arrow slits. One hand rests on the top of a ridge, its fingers wrapped around the stone. The other hand is thrust into the air, holding the hilt of a broken sword.[2] Seabirds nest on the statue's arms and shoulders.[2]

The Titan's head, rising four hundred feet above sea level,[1] is crested with a bronze halfhelm, and it has green-dyed hempen rope for its long hair. In its eyes burn large beacon fires, lighting the way inside the lagoon for returning ships.[2] The watchmen within the statue can steer enemy ships onto the nearby rocks.[1]

Whenever a ship approaches its entrance, the Titan lets out a roar to warn the Arsenal of Braavos;[2] the terrible groaning and grinding blast drowns out most sounds nearby[2] and can be heard across the lagoon in the city.[4] The Titan also roars to herald sunrise[4] and sunset,[5] and the hours of the day are counted by its roar.[6]

During the anniversary of the Uncloaking, at midnight on the tenth day, the Titan roars to signify that the celebrants should all remove their masks.[1]

According to a semi-canon source, the Titan is included by Lomas Longstrider in Wonders Made by Man.[7]

Old Nan has told stories about the Titan to the children of Eddard and Catelyn Stark.[8] Nan claims that the statue comes to life to smash enemies, and that it eats highborn girls like Arya Stark.[2]

Mero, a Braavosi sellsword who captains the Second Sons, calls himself the Titan's Bastard.[9]

The titan's head is depicted on the sigil of House Baelish.[11] 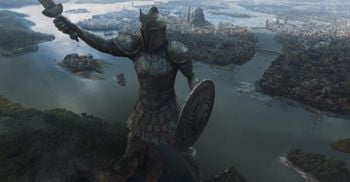 The Titan guarding Braavos in Game of Thrones

The archway of the Titan's legs was carved and shaped by three generations of sculptors and stonemasons.[1]

According to Maester Yandel, the Titan has not been attacked since the Century of Blood.[1] Lomas Longstrider marveled at the Titan when he visited Braavos.[1]

During the Dance of the Dragons, King Aegon II Targaryen desired that statues larger than the Titan be built of his late brothers, Princes Aemon and Daeron, in King's Landing.[12] Lord Manfryd Mooton and his fellow envoys marveled at the Titan when they were sent to treat with the Sealord of Braavos during the regency of Aegon III.[13]

Because of a dispute with the Iron Bank of Braavos, King Aerys II Targaryen desired to built a huge war fleet "to bring the Titan to his knees" in 267 AC. Lord Tywin Lannister, the Hand of the King, resolved the situation peacefully by paying the Iron Throne's debts with gold from Casterly Rock.[14]

Samwell Tarly has wanted to visit Braavos and see the Titan since he read about the city as a boy.[15] Tyrion Lannister hopes to one day see the Titan as well.[16]

Arya Stark wishes she had wings and could fly away from Harrenhal to see sights such as the Titan.[8]

Arya sails underneath the Titan when arriving in Braavos on Titan's Daughter.[2]

The roar of the Titan to announce nightfall awakens the child with Samwell Tarly and Gilly.[15] 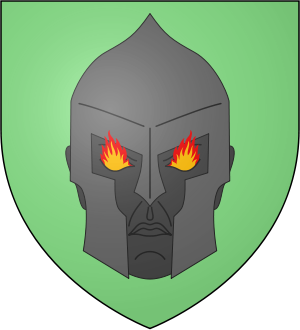 The sigil of House Baelish depicts the Titan's head.

Petyr: My grandfather's shield. His own father was born in Braavos and came to the Vale as a sellsword in the hire of Lord Corbray, so my grandfather took the head of the Titan as his sigil when he was knighted.


Petyr: Rather too fierce, for an amiable fellow like me. I much prefer my mockingbird.[11]
—Petyr Baelish and Sansa Stark

Old Nan had told them stories of the Titan back in Winterfell. He was a giant as tall as a mountain, and whenever Braavos stood in danger he would wake with fire in his eyes, his rocky limbs grinding and groaning as he waded out into the sea to smash the enemies.[2]

Her neck craned upward. Baelor the Blessed would not reach his knee. He could step right over the walls of Winterfell.[2]

I read a book about Braavos when I was small. The whole city is built in a lagoon on a hundred little islands, and they have a titan there, a stone man hundreds of feet high.[17]