From A Wiki of Ice and Fire
(Redirected from Tormund Giantsbane)
Jump to: navigation, search

Tormund, often called Tormund Giantsbane or Tormund Thunderfist, is a famous free folk raider from Ruddy Hall. He has four sons, Toregg, Torwynd, Dryn, and Dormund, and one daughter, Munda.[6] In the television adaptation Game of Thrones he is portrayed by Kristofer Hivju.

Although not tall, Tormund has a broad chest, a massive belly,[7] and a beard white as snow.[5] On his massive arms he wears golden bands engraved with runes of the First Men,[5][1] which have been passed down by his forefathers.[7] Tormund is armored with heavy ringmail taken from a dead ranger.[5]

The often jovial Tormund enjoys food and drink, especially ale and mead.[5][7] He is styled Tall-talker, Horn-blower and Breaker of Ice, Husband to Bears, the Mead-king of Ruddy Hall, Speaker to Gods and Father of Hosts.[5] Mance Rayder named him Horn-blower for the power of Tormund's lungs.[7] It is said that Tormund can laugh the snow off mountaintops.[7] He distrusts the men of the Frozen Shore.[3] Tormund does not know how to read.[4]

Although Tormund is said to have slain a giant, he claims to have actually cut open the belly of a sleeping giantess and slept in her for warmth during a winter storm. Tormund claims the giantess, thinking he was a babe, then suckled him for three months in the spring.[1] Tormund also claims to once have drunkenly slept with a bear.[1]

Tormund once thought to make himself King-Beyond-the-Wall, but he was defeated by Mance Rayder.[4] 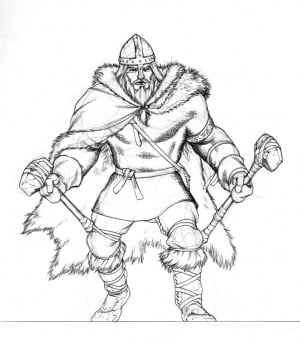 Tormund is among those gathered in Mance Rayder's tent when Jon Snow is presented to him.[5] Jon is attached to Tormund's war party, with Ygritte and Longspear Ryk joining as well. Tormund joins in the singing of "The Last of the Giants", and he advises Jon to sleep with Ygritte.[1]

During the battle beneath the Wall, Jon sees Tormund and two of his sons near a siege turtle.[8] When Jon goes to treat with Mance for the Night's Watch, Tormund is the first to greet him. He brings Jon to Mance's tent and defends Jon's right to speak to Mance. The King-Beyond-the-Wall threatens to have Tormund blow the Horn of Winter to bring down the Wall. When Stannis Baratheon attacks the wildlings, Tormund leads a triple line of spearmen. They are attacked on the flank by Stannis's knights and break.[9] Tormund escapes capture by Stannis's knights,[10] but his son Dormund is killed by Ser Richard Horpe.[7]

With Mance a captive at Castle Black, Tormund becomes the leader of many free folk beyond the Wall.[6] 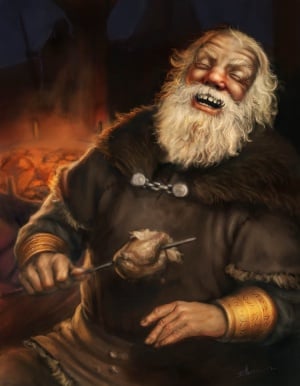 Tormund is forced to end one of his sons, Torwynd, after he dies from a chill and rises as a wight. Tormund's daughter, Munda, marries Longspear Ryk.[7]

Jon Snow, now Lord Commander of the Night's Watch, and other officers expect that Tormund will besiege the undermanned Wall again.[11] Jon sends Val to retrieve Tormund and bring an offer of peace to him.[12] Tormund agrees to the terms and goes to the Wall. The free folk do not like the terms offered by the Night's Watch, but with attacks of the Others constantly decimating their numbers and their people's suffering only increasing, they consent to the terms.[7] Tormund claims there are four thousand who follow him.[7]

Tormund has the free folk hand over their wealth or anything of value to the Watch, along with a son as a hostage from their chiefs. Tormund calls this Jon's "blood price". Tormund is the first of the free folk to hand over his wealth, giving over his gold wristbands. Jon states he may keep them if he wishes, but Tormund refuses; he will not let it be said he made the rest of his people give up their wealth while he kept his.[7]

The peace means free folk warriors will garrison the abandoned castles along the Wall to help the Night's Watch defend the Seven Kingdoms from the Others, while the non-martial free folk will be settled on the Gift and the New Gift. Jon re-garrisons Oakenshield as Tormund's seat.[7] The lord commander takes Tormund's son Dryn as his page.[3] Another son, Toregg, burns the dead to prevent them from becoming wights.[3]

Jon asks Tormund to march with him to rescue Cotter Pyke and the stranded people at Hardhome. However, Jon changes his plans when he receives a letter from Ramsay Bolton. Tormund agrees to lead the ranging to Hardhome instead, after hearing the letter's contents. Jon is then attacked in the mutiny at Castle Black.[4]

Tormund: Hold. You gave Styr his style, give me mine.


Mance: As you wish. Jon Snow, before you stands Tormund Giantsbane, Tall-talker, Horn-blower, and Breaker of Ice. And here also Tormund Thunderfist, Husband to Bears, the Mead-king of Ruddy Hall, Speaker to Gods and Father of Hosts.


Tormund: That sounds more like me.[5]
—Tormund and Mance Rayder

See, lad, that's why he's king and I'm not. I can outdrink, outfight, and outsing him, and my member's thrice the size o' his, but Mance has cunning.[5]

If a man does not use his member it grows smaller and smaller, until one day he wants to piss and cannot find it.[1]


Jon: I never knew you feared anything, Tormund.

I have killed more o' you black buggers than I can count.[7]

Jon: You're a good man, Tormund Giantsbabe. For a wildling.
Tormund: Better than most, might be. Not so good as some.[3]

Well spoken, crow. Now bring out the mead! Make them yours and get them drunk, that's how it's done. We'll make a wildling o' you yet, boy. Har![4]

Small wonder that the Seven Kingdoms thought the free folk scarcely human. They have no laws, no honor, not even simple decency. They steal endlessly from each other, breed like beasts, prefer rape to marriage, and fill the world with baseborn children. Yet he was growing fond of Tormund Giantsbane, great bag of wind and lies though he was.[1]

Stannis: And this other man, this Tormund of the many names who eluded us after the battle? Answer me truly.
Jon: Tormund Giantsbane seemed to me the sort of man who would make a good friend and a bad enemy, Your Grace.[10]

Bowen: These are wildlings. Savages, raiders, rapers, more beast than man.
Jon: Tormund is none of those things, no more than Mance Rayder.[12]

Tormund may be partly inspired by the Norse thunder god Thor, who attempted to slay a sleeping giant in a folk tale. Further supporting this possibility, Tormund is known as "Thunderfist".

Tormund on the Game of Thrones wiki.