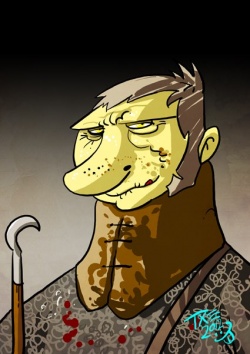 The Tickler, an expert torturer. By TheMico

Torture is the act of deliberately inflicting physical or psychological pain on a person in order to fulfill some desire of the torturer or compel some action from the victim. It is also referred to as "tickling"[1] or "being put to the question".[1][2]

The dungeon of the Red Keep's lowest level is used for torture. It is supposedly safer to go through the fourth level of the dungeons in darkness, because there are things one would not wish to see.[3]

The Dreadfort is ill-omened, for it is said that the Boltons still keep torture chambers and a special room where they hang the flayed skins of their enemies, including several Kings in the North from House Stark.[4]

There are dungeons in the cellars of the Wolf's Den, including oubliettes, torture chambers, and rat-filled pits.[5]

The Great Masters use the pit in the Great Pyramid as a prison. There are torture chambers where slaves are scourged and skinned and burned with red-hot irons.[2]

Asshai and Nefer are said to be inhabited by torturers.[6][7]

Methods of torture include:

The Bloodstone Emperor was a torturer and necromancer who practiced dark arts and enslaved his people.[14]

Torturers of the Valyrian Freehold devised new torments in the dungeons of Gogossos.[15]

Tyrion II Lannister, called the Tormentor, was a King of the Rock who delighted in torture.[16]

Tyanna of the Tower alleged to King Maegor I Targaryen that Queen Alys Harroway had slept with twenty men, and the king had the accused tortured.[17] Prince Viserys Targaryen was questioned to death by Tyanna.[18]

The Lord Confessor was a position of in the royal court in the Seven Kingdoms under the rule of House Targaryen. The Lord Confessor served as the royal torturer and was overseen by the King's Justice.[19] Larys Strong joined the confessors and eventually became Lord Confessor.[20] After the fall of King's Landing during the Dance of the Dragons, Ser Tyland Lannister was blinded, mutilated, and gelded for having refused to reveal where he had hidden gold.[10] During the regency of Aegon III, Lord Thaddeus Rowan was tortured by Lord Confessor George Graceford.[21] There has not been a Lord Confessor since the reign of King Daeron II Targaryen.[19]

Ser Terrence Toyne of the Kingsguard was tortured to death after sleeping with Bethany Bracken, a mistress of King Aegon IV Targaryen.[22]

Ser Glendon Flowers was charged and tortured for the theft of a missing dragon egg.[23]

Blaming her for the death of Prince Jaehaerys, King Aerys II Targaryen had one of his mistresses and her kin tortured to death.[24]

The Tickler is one of the Mountain's men, the group that captures Arya Stark, Gendry, and Hot Pie in the riverlands. The Tickler tortures smallfolk on the orders of Ser Gregor Clegane, trying to gain information on the whereabouts of Lord Beric Dondarrion and any food and valuables they might know the locations of.[25] For this, Arya adds him to her list.[25]

Lord Roose Bolton delivers a piece of Theon Greyjoy's skin to Robb Stark, King in the North, and his mother, Catelyn Stark. Blamed for the sack of Winterfell, Theon is reportedly being flayed alive by Ramsay Snow, the Bastard of Bolton, at the Dreadfort.[26]

At the inn at the crossroads, Sandor Clegane warns the innkeeper that the Mountain's men plan to torture him to find out where he keeps his gold.[27] Gregor cuts off Vargo Hoat's limbs piece by piece over an extended period of time.[27]

The singer Marillion is tortured into confessing that he killed Lysa Arryn.[8]

Qyburn joins the court at King's Landing. Queen Regent Cersei Lannister has Qyburn torture the Blue Bard in the black cells, to convince him to give evidence against Queen Margaery Tyrell.[28] The torture so breaks his mind that even after the Blue Bard is delivered to the High Sparrow and whipped, he persists in the story that Cersei and Qyburn had taught him.[29]

During his torture, the Blue Bard is forced to list those he claims are Queen Margaery's secret lovers. Among them is Ser Osney Kettleblack who, under Cersei's instructions, goes to the High Sparrow to confess.[28] The High Sparrow has Osney tortured to verify his confession. Under that duress, Osney tells a different story, which implicates Cersei in the death of the previous High Septon and in having sexual relations with Osney.[29]

Falyse Stokeworth dies screaming in the black cells due to Qyburn's torture and experiments.[30] Lord Regent Kevan Lannister visits Cersei in her cell, and tells his niece that Qyburn is still in charge of the dungeons where most of the accused lovers of Margaery are held. Cersei is pleased to hear this, as Qyburn can do wonders and horrors with his torture.[31]

In Meereen, Queen Daenerys Targaryen orders an investigation, permitting Skahaz mo Kandaq to torture a wineseller when she discovers that three freedmen were among the slain by the Harpy's Sons.[2]

Old Bill Bone tells Frog (Prince Quentyn Martell) that Pretty Meris can stretch out a man's dying for a moon's turn. Books tells Frog a rumor that Daenerys has had envoys tortured.[32] When Ser Gerris Drinkwater, Ser Archibald Yronwood, and Quentyn discuss the possibility of deserting the Windblown, Gerris's mentioning of being given to Meris as punishment gives Quentyn pause.[32]

According to Ser Justin Massey, Ser Clayton Suggs would gamble with the torturers at Dragonstone and lend them a hand in the questioning of prisoners, especially if the prisoner were a young woman.[33]

Penny tells Tyrion Lannister that her brother Oppo decided they should leave King's Landing before someone wondered if they had had some part in the death of King Joffrey I baratheon and decided to torture them to find out.[34] Outside Meereen Tyrion witnesses a group of Tolosi slingers torture and kill three slaves.[35]

Theon is mentally and physically broken by Ramsay and lives in terror of him. [9] Asha Greyjoy, who is a captive with Stannis Baratheon's army, barely recognizes her brother at the crofters' village.[33]

No one ever survived the Tickler's questioning; no man, no woman, no child.[25]

The skin from the little finger of Theon Greyjoy's left hand. My son is cruel, I confess it. And yet ... what is a little skin, against the lives of two young princes? You were their mother, my lady. May I offer you this ... small token of revenge?[26]

When you're done drinking you'll tickle the inkeep to see where he keeps his gold. The way you always do.[27]

Daenerys: Skahaz, keep each apart from the others and put them to the question.
Skahaz: It will be done, Your Worship. Would you have me question them sweetly, or sharply?[2]

The Tattered Prince takes a dim view of deserters. He'll send hunters after us, and Seven save us if they catch us. If we're lucky, the'll just chop off a foot to make sure we never run again. If we're unlucky, they'll give us to Pretty Meris.[32]