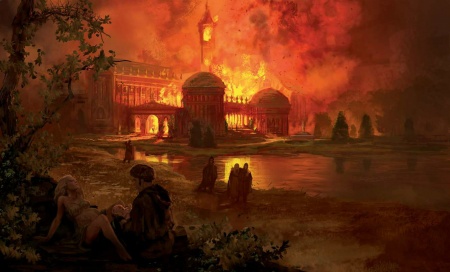 The Tragedy at Summerhall was a fire at Summerhall, a pleasure castle of House Targaryen in the Dornish Marches, in 259 AC. The conflagration caused the deaths of, among others, King Aegon V Targaryen, his eldest son, Prince Duncan Targaryen, and Ser Duncan the Tall, the Lord Commander of the Kingsguard.[1]

The cause of the fire is as yet unknown, but was connected with King Aegon's desire to restore dragons to the Seven Kingdoms. The last years of his reign were consumed by a search for ancient lore about the dragon breeding of Valyria, and it was said that Aegon commissioned journeys to places as far away as Asshai, with the hopes of finding texts and knowledge that had not been preserved in Westeros.[1]

In 259 AC, Aegon summoned many of those closest to him to Summerhall to celebrate the impending birth of his first great-grandchild to Aerys and Rhaella, the children of Aegon's heir Prince Jaehaerys.[1]

Summerhall's maester Corso sent a letter before his death, describing the tragedy,[2] but a mishap led to ink blotting out much of the information:

the blood of the dragon gathered in one …
… seven eggs, to honor the seven gods, though the king's own septon had warned …
… pyromancers …
… wild fire …
… flames grew out of control … towering … burned so hot that …
… died, but for the valor of the Lord Comman …[1]

Many died, and fire destroyed the castle,[3][4] leaving it a ruin.[5] According to Ser Barristan Selmy, sorcery was involved.[6]

The tragedy that transpired at Summerhall left very few witnesses alive, and those who survived would not speak of it.[1] The death of King Aegon brought Jaehaerys II Targaryen to the throne, but he had to put aside his grief and make immediate plans for the War of the Ninepenny Kings. The young Ser Gerold Hightower became the new Lord Commander of the Kingsguard.[14]

Prince Rhaegar Targaryen, who was born at Summerhall amongst the flames,[3][11] often returned there alone, with not even the Kingsguard for company. He would sleep under the stars in the ruined hall, and would be inspired to compose songs for his harp, about "twilights and tears and the death of kings."[5]

On Dragonstone, Alester Florent asks Davos Seaworth if nothing was learnt from the tragedy of Summerhall. He states that no good has ever come of dreams of dragons.[15]

While encamped outside of Yunkai, Arstan Whitebeard tells Daenerys Targaryen that her brother Rhaegar was considered melancholic at times, that he had a sense of doom. Dany recalls that her brother Viserys had spoken of Rhaegar's birth only once, she wonders to herself if perhaps the tale had saddened Viserys too much. Dany asks Arstan if it was the shadow of Summerhall that haunted Rhaegar. Arstan tells her yes, but that Summerhall was the place that the prince loved best.[5]

In the Riverlands, the ghost of High Heart asks Tom of Sevenstreams to play "my Jenny's song", and listens to it while rocking back and forth, murmuring the words and crying. She tells Arya Stark that she gorged on grief at Summerhall.[13]

In Braavos, Maester Aemon mentions to Samwell Tarly that he once thought that Rhaegar could be the prince that was promised due to the smoke from the fire that devoured Summerhall on the day of Rhaegar's birth and the salt from the tears shed for those who died, a reference to the "born amidst salt and smoke" part of the prophecy.[3]

In Meereen, Daenerys Targaryen asks Ser Barristan Selmy what became of the woods witch who foretold that the prince that was promised would be born from her mother and father's line. Ser Barristan tells her only "Summerhall", in a voice of doom.[12] Later, Barristan thinks of the marital choices of the sons of King Aegon the fifth, which led to treason and turmoil, ending at Summerhall in sorcery, fire, and grief.[6]

Viserys had spoken of Rhaegar's birth only once. Perhaps the tale saddened him too much.[5]

It was the shadow of Summerhall that haunted him, was it not?[5]

You are cruel to come to my hill, cruel. I gorged on grief at Summerhall, I need none of yours.[13]

—the ghost of High Heart, to Arya Stark