Tumblestone
The riverlands and the location of the Tumblestone

The Tumblestone is a river in the westerlands and the riverlands. It is a tributary of the Red Fork of the Trident.[1][2]

After beginning in the western hills, the Tumblestone flows east into the Red Fork of the Trident.[3] Riverrun sits at the confluence,[4] with the castle's Water Gate opening on the Tumblestone.[5] The nearest ford is leagues upriver from Riverrun.[6] A swift river,[7] the Tumblestone is much deeper than the placid Red Fork.[8][6] 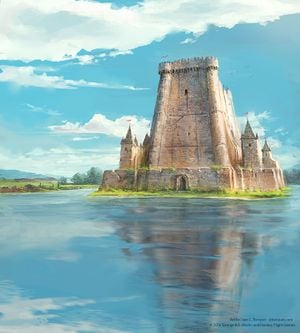 Axel Tully constructed Riverrun at the juncture of the Tumblestone and the Red Fork on land granted to him by Armistead Vance.[9]

During his conquest of the riverlands, Harwyn Hoare, King of the Iron Islands, shattered the lines of Ser Samwell Rivers on the Tumblestone, with hundreds drowning.[1]

Ser Jaime Lannister establishes three camps during his siege of Riverrun. During the Battle of the Camps, the Lannister camp on the northern shore of the Tumblestone is attacked by Ser Brynden Tully. Lord Andros Brax drowns while trying to cross the river to aid the Lannister camp.[10]

In preparation for the Battle of the Fords,[11] the Darrys, Paeges, and Pipers set up camp north of the Tumblestone, while the Blackwoods establish themselves between the Tumblestone and the Red Fork.[12] During the plot to free Jaime Lannister from captivity at Riverrun, Ser Edmure Tully is wenching north of the river.[12]

A boat carrying the body of Lord Hoster Tully is released into the Tumblestone from Riverrun and then sails into the Red Fork.[5]

Jeyne Westerling rides an hour north of the Tumblestone in an effort to join her new husband, Robb Stark, in his journey to the Twins, but the King in the North sends her back to Riverrun.[13] 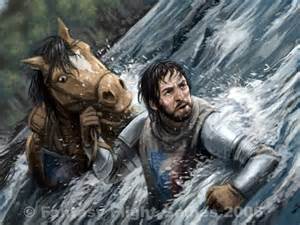 Ser Ryman Frey establishes his large and disorderly camp north of the Tumblestone during the siege of Riverrun.[14] Jaime, the Lord Commander of the Kingsguard, threatens Edmure that he will destroy Riverrun and divert the Tumblestone over its ruins if the castle is not yielded.[6]

Catelyn watched from the battlements, waiting and watching as she had waited and watched so many times before. Beneath her, the swift wild Tumblestone plunged like a spear into the side of the broad Red Fork, its blue-white current churning the muddy red-brown flow of the greater river. A morning mist hung over the water, as thin as gossamer and the wisps of memory.[11]