Tysha was a peasant girl of the westerlands, and the first wife of Tyrion Lannister.

Tysha was dark-haired, slender, and beautiful in Tyrion's eyes. She had blue eyes.[2] He describes her as being scarcely a year older than himself.[3] She used to sing the Myrish song, "The Seasons of My Love".[3] 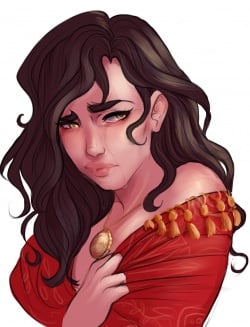 Tysha was a crofter's daughter, orphaned when her father died of an illness. When Tyrion Lannister was thirteen years old, he was traveling with his brother, Ser Jaime, on the road between Lannisport and Casterly Rock, and found Tysha being accosted by some outlaws. Jaime chased down the men, while Tyrion took care of Tysha. He took her to a nearby inn and fed her; they drank wine and talked, and soon they were making love. Tysha cried when he took her maidenhead, but afterwards kissed him and sang "The Seasons of My Love". Tyrion fell in love with Tysha, and they were married by a drunken septon, with pigs as witnesses.[3][4] They lived in a little cottage by the sunset sea, and spent whole days in bed. They would kiss and make love, and Tysha would sing for him.[3][5]

A fortnight later, the septon confessed to Lord Tywin Lannister, Tyrion's father. Incensed at a common woman daring to marry a Lannister, Tywin ordered Jaime to tell Tyrion that Tysha was a maiden whore who Jaime had paid to make Tyrion a man, even arranging the incident with the outlaws to set the scene. Tywin then had Tysha gang-raped by his guards in their barracks; each guard gave her a silver coin. To drive the lesson home, Tywin forced his son to be the last man to rape her, for whom Tysha was paid a gold coin, because Lannisters were worth more.[3] Afterwards, Tywin had the marriage undone, and the septons said it was as if Tyrion and Tysha had never been wed.[6]

After leaving the Eyrie, Tyrion Lannister and Bronn make camp on the high road, and Tyrion tells Bronn of his first wife. Bronn states that he would have killed the man who did that to him, and Tyrion remarks that he might yet: a Lannister always pays his debts.[3]

On his way to visit Shae at her manse in King's Landing, Tyrion is reminded of Tysha when he hears music. He thinks he is free of Tysha's memory, having found Shae. Tyrion confides in Shae about his history with Tysha.[7]

After sustaining an injury at the Battle of the Blackwater, a feverish Tyrion dreams of Tysha and their brief life together.[5]

After Tyrion and Sansa Stark are forced to wed, Tyrion tells her that he was once briefly married to Lady Tysha of House Silverfist, whose sigil depicts a gold coin and a hundred silver coins on a bloody sheet.[4]

At Harrenhal, when Ser Jaime Lannister hears of Tyrion's marriage to Sansa, he thinks she will please his brother, and remembers how happy Tyrion had been with Tysha for a fortnight.[8] Jaime also thinks about how Tyrion "loved him for a lie",[9] and that he had been good to him, except for one time.[10]

When Jaime rescues his brother Tyrion from prison, he confesses that Tysha was no whore, but a crofter's daughter in truth. He says that their father, Lord Tywin Lannister, thought the lowborn Tysha only desired the wealth of Casterly Rock, and so convinced Jaime to tell the lie about her. Tyrion realizes that Tysha had been genuinely in love with him, and he becomes furious with Jaime. He leaves his brother to find Lord Varys, who is to take him out of the Red Keep through secret passages. However, before leaving, Tyrion makes his way through a passage to Tywin's chambers in the Tower of the Hand. Tyrion confronts his father, pointing a crossbow at him, demanding to know what happened to Tysha. Tywin does not remember the name, but when Tyrion says she was the girl he married, Tywin calls her Tyrion's "first whore". Tyrion says he will kill Tywin if he calls Tysha a whore again. Prompted, Tywin recalls that he did not have her killed, as she'd learned her place, and supposes Casterly Rock's steward sent her on her way. When Tyrion asks where that was, Tywin replies "wherever whores go". The word causes Tyrion to shoot the crossbow's arrow into Tywin's belly, killing him. Tyrion then escapes.[12]

Throughout his travels in Essos, Tyrion is haunted by his father's cruel answer. He often remembers Tywin saying "wherever whores go", followed by the sound of the crossbow.[13][14][15][16] He wonders to himself "where do whores go?", and even asks others the question.[13][17][18][15][19][16] Tyrion vaguely hopes he will find Tysha on his travels, but a prostitute in Selhorys does not recognize her name when Tyrion asks about her.[19]

She was scarcely a year older than I was, dark-haired, slender, with a face that would break your heart. It certainly broke mine. Lowborn, half-starved, unwashed ... yet lovely.[3]

His sweet innocent Tysha had been a lie from start to finish, only a whore his brother Jaime had hired to make him a man.[7]

She was no whore. I never bought her for you. That was a lie that Father commanded me to tell. Tysha was ... she was what she seemed to be. A crofter's daughter, chance met on the road.[12]

—thoughs of Tyrion Lannister, when asked who he misses