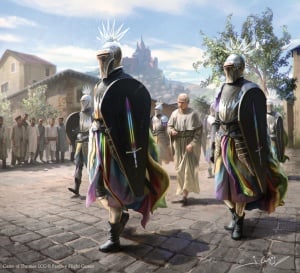 The Warrior's Sons of old wore rainbow cloaks and inlaid silver armor over hair shirts. They bore star-shaped crystals in the pommels of their longswords.[2]

The recent Warrior's Sons wear swordbelts and cloaks striped in the seven colors of the Faith.[2][3] They have crystals adorning the pommels of their longswords and the crests of their greathelms, and carry kite shields displaying the ancient badge of the Swords: a rainbow sword shining bright upon a field of darkness.[4][5] Their armor is made of silver plate, and polished to a mirror sheen. Underneath, the Warior's Sons wear a hair shirt, as did the Warrior's Sons of old.[5]

The Warrior's Sons are all anointed knights. Most in the revival of the order had been household knights or hedge knights before joining the military order, while some are of higher birth.[4] Upon joining the Warrior's Sons, they take vows, giving up their lands and gold. The Warrior's Sons of old were said to have been holy men, ascetics, fanatics, sorcerers, dragonslayers, and demonhunters, implacable in their hatred for all enemies of the Faith.[2]

Before their disbandment during the reign of King Jaehaerys I Targaryen, the Warrior's Sons were permanently stationed at chapterhouses in several major cities and towns. The Warrior's Sons had one overall commander known as a Grand Captain.

At the outbreak of the Faith Militant uprising in 41 AC, the major chapters were:[6]

White Harbor, despite being one of the only five settlements in Westeros large enough to be considered a "city", did not host a chapterhouse of the Warrior's Sons, even though House Manderly follow the Seven. 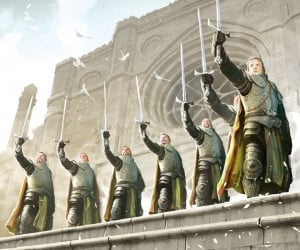 The Faith Militant rebelled against King Aenys I Targaryen when the king married his eldest daughter to his eldest son and heir in 41 AC.[7] After Aenys and his family fled King's Landing to Dragonstone, the King's Landing chapter of the Warrior's Sons seized the gates of the city, giving them control over who may enter or leave the capital, and drove the workers from the unfinished Red Keep. They also fortified the Hill of Rhaenys, ensuring the Sept of Remembrance could withstand the Targaryens.[6][7]

Following the death of King Aenys I on Dragonstone in 42 AC, his half-brother, Maegor I Targaryen, claimed the crown. Maegor traveled to King's Landing, where Dowager Queen Visenya Targaryen challenged those who questioned her son's right to rule. The captain of the Warrior's Sons, Ser Damon Morrigen, met this challenge, and the parties agreed to a trial of seven. Maegor was the only survivor of the fourteen combatants.[8]

With Maegor declared as the winner, the Warrior's Sons who witnessed the fight dropped their knees in submission and returned to the Sept of Remembrance, where they began to pray and debate whether to accept Maegor as their king, since the gods had granted him victory, or to fight on as they were bound by oath to the High Septon. Twenty-nine days after the trial of seven, the Sept of Remembrance and all the Warrior's Sons in it were burned down by Maegor with his dragon, Balerion.[6]

Thirteen thousand Poor Fellows and hundreds of knights of the Warrior's Sons joined forces with rebel lords of the riverlands and westerlands to fight against Maegor's forces at the Stoney Sept. During this fierce battle at the Great Fork of the Blackwater, the Faith lost when Maegor and his dragon, Balerion, left death in their wake.[8]

In 43 AC, the order elected Ser Joffrey Doggett as its new Grand Captain, who rode for Oldtown to seek the blessing of the High Septon. Meanwhile, Maegor raised a set of laws which outlawed the orders of the Faith Militant,[6] and forbade holy men from carrying arms.[3][9] That same year,[N 2] the Warrior's Sons of Oldtown surrounded the Starry Sept to protect it from the impending arrival of the King Maegor, Queen Dowager Visenya, their dragons, and the royal army. However, when they arrived by dawn, they found the city gates open and the High Septon suddenly dead. All of the Warrior's Sons were disarmed and arrested under orders of Lord Martyn Hightower, who opened the gates before Balerion and Vhagar could burn the city.[1][6]

The captive Warrior's Sons were given a choice by Maegor: renounce the order and be permitted to join the Night's Watch or die as martyrs of the Faith. Three-quarters of the captive chose the Wall, while the remainder died. Seven of their number, famous knights and sons of lords were given the honor of having Maegor behead them himself with Blackfyre. The rest were beheaded by their own former sworn brothers. Only one of the condemned received a pardon: Ser Morgan Hightower, brother of Lord Martyn and commander of the local chapter of the order. The pardon has led to rumors still persisting today, suggesting he had murdered the High Septon at his brother's request,[1] as he had been seen entering and leaving the chambers of the High Septon in the night of his death.[6]

The new High Septon disbanded the Stars and Swords, while Maegor granted the surviving members of the Faith Militant til the year's end to surrender their weapons and give up their rebellion.[6] Afterward, those who remained defiant would find bounties on their heads: a gold dragon for the head of any Warrior's Son, and a silver stag for the scalp of each Poor Fellows.[10]

In 46 AC, Maegor brought two thousand skulls from his campaign against the Faith back to King's Landing, claiming they were the heads of Warrior's Sons and Poor Fellows. However, many suspected they were the skulls of innocent smallfolk.[8]

The end of the Warrior's Sons began following the death of Maegor I and the ascension of Jaehaerys I Targaryen in 48 AC. Although much reduced in numbers, the Warrior's Sons and Poor Fellows were still present. They remained restless and eager to restore their orders. King Jaehaerys sent Septon Barth to Oldtown to speak with the High Septon. Eventually, it was agreed that the Iron Throne would always protect and defend the Faith, if the last few Stars and Swords would put down their weapons, and if the Faith agreed to accept justice from the Iron Throne instead of the Faith. As a result, the Faith Militant was disbanded.[9]

After the War of the Five Kings in 300 AC, the ruling King Tommen I Baratheon, under the edict of his mother and Regent Cersei Lannister, overturns Maegor the Cruel's law which forbade holy men from being armed, and the orders of the Faith Militant are reborn.[2] Over a hundred knights have so far pledged their swords and lives to the Warrior's Sons and obey the new High Septon, known by many as the High Sparrow.[4] Lancel Lannister, Lord of Darry, renounce his titles, land, and bride to serve the Warrior's Sons and the Faith of the Seven.[11] Cersei observes the Warrior's Sons' rainbow-striped robes,[3] rainbow stripes on their swordbelts,[4] and crystals on the crests of their greathelms.[4]

Warrior's Sons and Poor Fellows escort Cersei during her walk of atonement. The knights of Ser Theodan Wells wear silver plate atop hair shirts, and their kite shields depict the crystal sword.[5]

Holy men, ascetics, fanatics, sorcerers, dragonslayers, demonhunters … there were many tales about them. But all agree that they were implacable in their hatred for all enemies of the Holy Faith.[2]