From A Wiki of Ice and Fire
(Redirected from Wildling)
Jump to: navigation, search
"Wildling" and "wildlings" redirect here. For the people in the Vale sometimes called "wildlings", see Vale mountain clans. 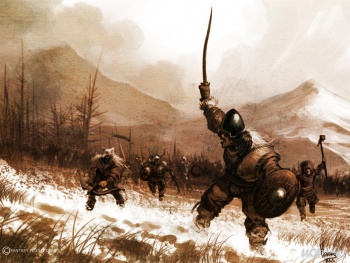 The free folk are a race of people who live beyond the Wall in northern Westeros. They are more commonly referred to as "wildlings" everywhere south of the Wall.

Free folk are split into countless[1] cultures, tribes, clans, villages, and raiding parties, some reasonably cultured, others savage and hostile.[2] 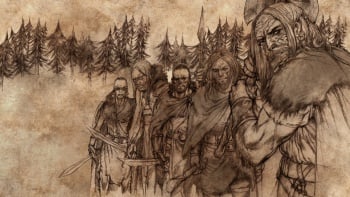 The free folk, from Game of Thrones Blu-ray

The Wall which separates the free folk from the rest of Westeros in many ways defines them. The free folk refer to themselves as such to differentiate themselves from "kneelers," the people south of the Wall subject to lords and kings. The free folk view "kneelers" as lacking freedom, whereas the people of the Seven Kingdoms to the south view "wildlings" as lawless and primitive killers, rapists, and thieves.[3][4]

Due to their isolation, the free folk remain a people free of states, nobles, kings, and laws but those of their own choosing, following whichever leader they please.[5] The free folk believe that the gods made the earth for all men to share and when the kings came with their crowns and their steel swords, they stole it by claiming it was all theirs and theirs alone.[4] There is little in the way of law or property rights in the lands of the free folk. They take what they can and keep what they can defend and have little interest in marriage.[5] 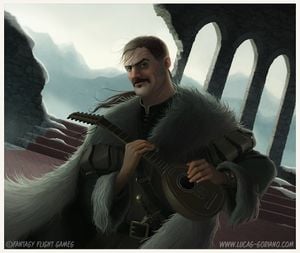 Free folk society is made of many tribes and clans, each with their own peculiarities and customs. Some recognize chieftains, while others exist in a perpetual state of conflict, warring against each other and themselves. The free folk place importance in a man keeping his word.[6] Some clans are led by clan mothers or magnars.[5]

Some clans live in small villages in the haunted forest, such as Whitetree, while others reside in halls such as Craster's Keep or Ruddy Hall. Thenns live in a hidden valley in the Frostfangs. Some are semi-nomadic loners, held down only by their own needs. By "kneeler" standards, strange clans include the Hornfoots, the Nightrunners, the men of the Frozen Shore, the cannibal ice-river clans, and the cave dwellers.[5]

Skinchangers and wargs are more accepted north of the Wall than in the Seven Kingdoms.[7] Wildlings burn their dead.[8]

The free folk keep to the ways of the First Men and there are many languages beyond the Wall, including the Common Tongue. The Old Tongue of the First Men is still spoken by some, such as the Thenns.[9]

The free folk have their own musical traditions, including bawdy songs[10] and ballads.[11] Known topics include the winter rose,[11] the Horn of Winter,[12] the Red Raven,[13] and "The Last of the Giants".[5] The songs of the legendary Bael the Bard are said to be known to all free folk.[11] Mance Rayder is able to sing in the Old Tongue.[5] Instruments used by the free folk include drums and pipes.[9][14]

However, free folk and the Watch are not beyond some form of cooperation. The two groups sometimes trade at Eastwatch-by-the-Sea,[7] lost brothers have been aided by free folk, and the Watch sometimes take free folk children and raise them to be members.[19]

There is also fighting and raiding by the various tribes and clans of the free folk north of the Wall. Nightrunners fight Hornfoots,[5] while factions of the men of the Frozen Shore feud amongst each other.[20]

Most free folk worship the old gods.[14] The Thenns view their Magnar as closer to a god than a lord, however.[5] The men of the Frozen Shore believe in gods of snow and ice, while crab gods may also be worshiped at Storrold's Point. Cave dwellers allegedly worship dark underground gods.[1] Gilly, one of Craster's wives, speaks of cold gods who take boys.[21]

In keeping with the spirit of free folk independence, women are welcome to take up arms and fight alongside men. Such women are called spearwives, and are known to be every bit as ferocious as their male counterparts.[11]

In marriage, free folk men are expected to be forceful with women, going so far as stealing them from their home or clan. The women, in turn, are expected to put up a fight every step of the way.[5] It is believed that a true man will steal a woman from afar to strengthen the clan. Men must steal daughters, but not wives of other men. When the red wanderer is within the Moonmaid, it is considered a propitious time for a man to steal a woman.[22]

Women who wed brothers, fathers, or clan kin are believed to offend the gods, and are cursed with weak and sickly children.[23]

Because infant mortality is common in the harsh environment beyond the Wall, it is believed to be bad luck to name a child before he or she reaches two years of age.[24] A temporary milk name or nickname can be given to a child prior to the official naming.[2] 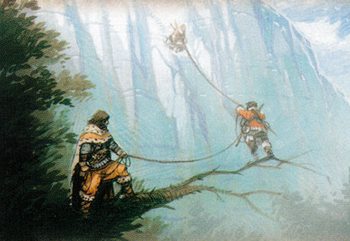 Raiding south of the Wall is a large part of free folk culture. Raiders start at a young age, as little as twelve years.[22] Raiders either climb the Wall or use little boats to cross the Bay of Seals around it. Climbing the height of the Wall is an exercise that can take most of a day and rangers of the Night's Watch often find the broken bodies of those who have fallen.[25]

To climb the Wall, the free folk use the aid of huge ladders of woven hemp, boots of supple doeskin spiked with iron, bronze, or jagged bone, small stone-headed hammers, stakes of iron and bone and horn, and antlers with sharpened tines bound to wooden hafts with strips of hide serving as ice axes.[25]

Over the decades, with the weakening of the Night's Watch, the free folk have found it much easier to either climb the Wall or paddle small boats through the Bay of Seals, growing bolder they raid as far as the Umber lands, the northern mountain clans, or Bear Island, instead of the usual villages and holdfasts in the Gift.

Raiders cross the Wall to steal swords and axes, spices, silks, furs, and any valuables they can find. They are known to take women in any season to carry them off beyond the Wall.[4]

Most free folk warriors wield armament wrought of stone, wood, and bronze, such as axes and flails, fire-hardened spears and lances, and bows of wood and horn. Their bows are outranged by the yew longbows of the south, but can seemingly shoot an arrow as high as seven hundred feet.[26][9]

The free folk do not mine nor smelt and there are few smiths and fewer forges north of the Wall; the only metal armor that they wear are bits and pieces looted from dead rangers. Most will wear boiled leather or sewn sheepskins and use crude round shields of skin stretched over wicker, painting them with figures such as skulls and bones, serpents, bear claws, twisted demonic faces, and severed heads.[17][26][12]

The Thenns are more well-armed and armored than most free folk, with bronze helms, axes, short stabbing spears with leaf-shaped heads, shirts sewn with bronze discs, and plain unadorned shields of black boiled leather with bronze rims and bosses.[22][26]

A wildling host gathering at the Wall,
as depicted by José Daniel Cabrera Peña in The World of Ice & Fire

The free folk descend from the First Men.[1] Archmaester Fomas speculated in Lies of the Ancients that the Others were not monsters but a tribe of early wildlings.[27]

Hardhome, the largest settlement of the free folk, was destroyed six hundred years ago.[2] Maester Wyllis writes about the free folk in Hardhome: An Account of Three Years Spent Beyond-the-Wall among Savages, Raiders, and Woods-witches.[1]

Some Kings-Beyond-the-Wall have occasionally led hosts of free folk south of the Wall, but they have eventually been defeated by the Night's Watch or northern lords, such as House Stark and House Umber.[1]

Mance Rayder slew three rivals and forced the submissions of Styr, Magnar of Thenn, and Tormund Giantsbane while becoming King-Beyond-the-Wall.[12] The various free folk clans have been unable to withstand the Others.[12]

See also: Conflict Beyond the Wall 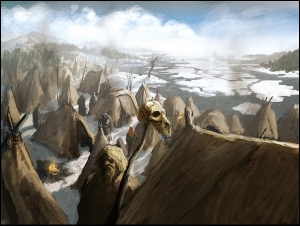 Mance Rayder, King-Beyond-the-Wall, is said to be massing his people in a secret stronghold.[28]

Jeor Mormont, Lord Commander of the Night's Watch, leads the great ranging in search of Mance and the missing Benjen Stark. The Night's Watch find the villages of the free folk abandoned, however.[8]

Having gathered the free folk to the Frostfangs, Mance Rayder sets them on the move south to the Wall, fleeing from the Others.[12] Mance sends a force over the Wall to try and attack Castle Black from the south so they can open the gate and pass the Wall.[29][12] Ninety-eight Thenns and sixteen raiders attack Castle Black, but are defeated.[26] Mance has his force attack the Wall, attempting multiple times to breach the gate.[9][30] They are eventually defeated when reinforcements from Eastwatch-by-the-sea arrive with the southern host of Stannis Baratheon.[12] A thousand of the free folk, including Mance, are captured, and another thousand killed.[31] The others flee.[7] 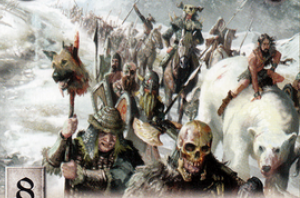 What remains of Mance Rayder's army scatters. Some submit to Stannis Baratheon and pass through the Wall,[23] while others spread out through the haunted forest toward Thenn or Hardhome.[7] Jon Snow, the new Lord Commander of the Night's Watch, assumes that many wildlings will regroup around Tormund.[32]

Among those of the free folk to submit to Stannis is Sigorn, the new Magnar of Thenn. Jon Snow arranges the wedding of Alys Karstark of Karhold to Sigorn, with the blessing of Stannis's queen Selyse Florent, thereby creating House Thenn.[14] Jon sends Val beyond the Wall to find Tormund and bring him to the Wall to negotiate.[2] She is successful in her mission.[14] Tormund leads three or four thousand free folk through the Wall, although twice that many are said to be at Hardhome with Mother Mole and other wildlings are spotted near the Shadow Tower. Jon garrisons many of the abandoned castles of the Night's Watch with free folk.[33] Jon sends Cotter Pyke to rescue the people at Hardhome, but the free folk do not trust the expedition and Maester Harmune writes of dead things in the water.[20] 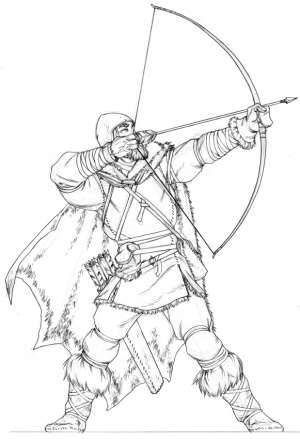 I met some wildlings when I was a boy. They were fair thieves but bad hagglers. One made off with our cabin girl. All in all, they seemed like any other men, some fair, some foul.[37]

These are wildlings. Savages, raiders, rapers, more beast than man.[2]

Now, a dog can heard a flock of sheep, but free folk, well, some are shadowcats and some are stones. One kind prowls where they please and will tear your dogs to pieces. The other will not move at all unless you kick them.[38]

Free folk and kneelers are more like than not, Jon Snow. Men are men and women women, no matter which side of the Wall we were born on. Good men and bad, heroes and villains, men of honor, liars, cravens, brutes ... we have plenty, as do you.[38]