"Winter Is Coming" is the first episode of medieval fantasy television series Game of Thrones. Running 62 minutes long, it premiered April 17, 2011.[1] It was written by the show creators David Benioff and D. B. Weiss, in a faithful adaptation of the first chapters of George R. R. Martin's book of the same name. Music was composed by Ramin Djawadi. The episode was directed by Tim Van Patten, paving over the work done by director Thomas McCarthy in an unaired pilot.[2]

As the first episode of the series, it introduces the setting and the main characters of the show. The episode centers on the Stark family, and how its lord gets involved in the court politics after the king chooses him to replace his recently dead Hand.

See also: Differences between A Song of Ice and Fire and Game of Thrones 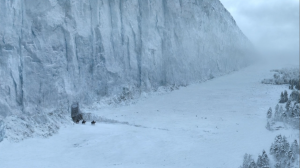 The rangers leaving the Wall.

The episode opens with three rangers of the Night's Watch scouting beyond the Wall, following the track of a group of wildings. After finding their mutilated corpses, they are surprised by the White Walkers. Two of them are killed, while the youngest is able to flee, seemingly at the will of the White Walker.

After the opening sequence, the Starks of Winterfell are introduced. Lord Eddard "Ned" Stark (Sean Bean) is informed that a deserter of the Night's Watch, the young ranger from the prologue, has been captured. Men of the Night's Watch are sworn never to desert their northern posts, upon penalty of death. Lord Stark takes with him his heir Robb (Richard Madden), his bastard son Jon Snow (Kit Harington), and his ten-year-old son Bran (Isaac Hempstead-Wright) to come with him to witness the execution. Upon their return, the Starks find the pups of a dead direwolf. Given that the direwolf is the sigil of the family and there are as many pups as the Stark children (even an albino runt for Jon), they take the pups with them.

Back at Winterfell, Lady Catelyn Stark (Michelle Fairley) informs her husband that a raven has come bearing a letter that announces the death of Jon Arryn, The Hand of the King and Eddard's old mentor. The message also reports that the king himself is coming to Winterfell. Winterfell receives the royal court where King Robert (Mark Addy) confides to his old friend Ned that he doesn't trust anyone around him. He decides to name Ned as the new Hand of the King, and to solidify the alliance between the two families he suggests that Ned's daughter, Sansa Stark (Sophie Turner) be betrothed to his son and the heir of the crown, Prince Joffrey (Jack Gleeson). At night, Catelyn receives a troubling message from her sister, Lord Arryn's widow. She suspects her husband Jon was murdered by the king's family-in-law, the powerful Lannisters. Ned, who at first was reluctant to accept the position of Hand of the King, finally does so in order to protect his old friend.On an abandoned section of Winterfell, young Bran enjoys climbing on the walls where he stumbles on Queen Cersei Lannister (Lena Headey) having sex with her twin brother Jaime Lannister (Nikolaj Coster-Waldau). In order to keep the incestuous relationship a secret, Jaime shoves the boy out of the high window. 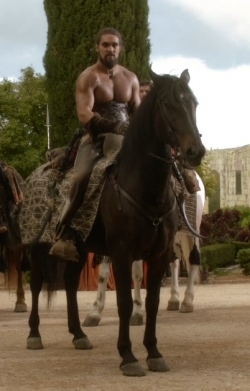 The exiled prince Viserys Targaryen (Harry Lloyd) plots to overthrow King Robert and reclaim his father's throne. To this end, he brokers a marriage between his sister Daenerys Targaryen (Emilia Clarke) and the powerful horselord Khal Drogo (Jason Momoa) in exchange for the Khal's army. Daenerys voices her fear of the barbarian lord, but her brother forces her to marry him against her will. During the wedding ceremony, Daenerys is given two particular wedding gifts. The first gifts are books from the Seven Kingdoms by Ser Jorah Mormont, an exiled knight who swears his fealty to the Targaryens. The second gifts are three dragon eggs by Magister Illyrio Mopatis, the man who helped arrange the marriage between her and Khal Drogo. After the ceremony, Drogo removes Daenerys' clothing as she cries. He then pushes her to the ground and the scene ends.

The series began development in January 2007.[4] HBO, after acquiring the rights to the novels with the intent of turning them into an international cable television series, hired David Benioff and D. B. Weiss to write and executive produce the series, which would cover one novel's worth of material per season. The first and second drafts of the pilot script, written by Benioff and Weiss, were submitted in August 2007 and June 2008[5] respectively. While HBO found both drafts to their liking, a pilot was not ordered until November 2008.[6] Director Tom McCarthy was chosen to direct the pilot episode, that was shot between 24 October and 19 November 2009 on location in Northern Ireland, Scotland and Morocco.[7] On September 2010 it was announced HBO's decision to greenlight the series.[8] However, due to artistic and casting reasons, it was decided that the pilot would not serve as the first episode and a reshoot was in order. The actors appearing in the original pilot that did not return for the series were:

Another difference is that the pilot featured scenes shot in Scotland (where Doune Castle was used to recreate Winterfell) and Morocco (reusing the sets of Kingdom of Heaven to stand in for Pentos).[9] In the series, Winterfell was created combining different locations in Northern Ireland and all the scenes from Pentos were relocated to Malta. The pilot remained unaired and the first episode was filmed by new director Tim Van Patten, although some scenes from the original pilot were used in the final cut.

Scripted by the show creators David Benioff and D. B. Weiss, the first episode includes the plot of the prologue and first six chapters of the book, the eighth, and the 11th (the second Daenerys chapter is pulled forward ahead of events that will be covered in the next episode). Prologue, Bran I, Catelyn I, Daenerys I, Eddard I, Jon I, Catelyn II, Daenerys II, Bran II) The main changes in the adaptation to the screen are the modification of the sequence of events in the prologue (most significantly, in the books it is Gared and not Will who survives and is beheaded by Eddard afterwards), the introduction of the Lannisters twins as independent point-of-view with new scenes created to show their perspective, and the modification of Daenerys' wedding night with Drogo having sex without waiting for her consent. The creators stated that this last change was made to simplify the narrative arc, having the situation improve gradually.[10]

The first episode of Game of Thrones obtained 2.2 million viewers in its premiere airing, with an additional 2 million viewers in the reruns aired during the same night. The day after the premiere HBO aired the episode six additional times, adding another 1.2 million to the viewer's figures.[11] Reruns aired during the following week climbed the total viewership to 6.8 million.[12] On April 18, 2011, the show premiered in United Kingdom and Ireland through Sky Atlantic. The show gathered 750,000 viewers, a ratings record for the network.[11]

The critical response to the first episode of the series was overwhelmingly positive. James Poniewozik from Time considered it an "epic win",[13] and Jace Lacob from The Daily Beast deemed it "unforgettable".[14] HitFlix's Alan Sepinwall wrote that while it was too early to say if Game of Thrones belonged to the HBO pantheon with shows like The Sopranos or The Wire, it has many things in common with those shows.[15]Much praise was given to the production values and the acting: Scott Meslow from The Atlantic states that "the show's immense cast is almost universally strong, and the fantasy land of Westeros feels lived-in, and looks terrific."[16] Alan Sepinwall also qualifies the casting as "really exceptional", and states that the show is "feast for the eyes", with all the different locations having their own memorable looks.[15]The opening sequence, with an aerial view of the world where the series takes place with the different settings emerging from it, was also acclaimed.[15][16]

This page uses content from the English Wikipedia. The original content was at Winter Is Coming. The list of authors can be seen in the page history of Winter Is Coming. As with A Wiki of Ice and Fire, the content of Wikipedia is available under the Creative Commons Attribution-ShareAlike License.