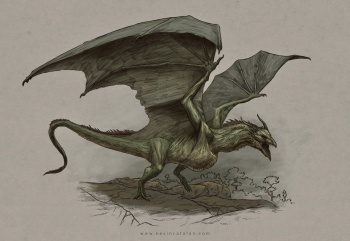 A wyvern, as envisioned by Kevin Catalan ©

Wyverns are species of animal that lives in Sothoryos, kin to dragons, although they do not breathe fire.[1][2] Wyverns have great leathery wings, "cruel" beaks, and an insatiable hunger. They are more ferocious than dragons, if smaller in size. Wyverns are called "the tyrants of the southern skies", and are one of the reasons why Sothoryos is thinly populated.[2] Septon Barth wrote about wyverns in Dragons, Wyrms, and Wyverns: Their Unnatural History,[3] and speculated that Valyrian bloodmages may have created dragons using wyvern stock.[2]

Varieties of wyverns include brindled wyverns, swamp wyverns, brownbellies, and shadow-wings. Brindled wyverns have green-and-white scales, and grow up to thirty feet long. Swamp wyverns may grow larger than that, but they are mostly inactive and rarely fly far from their lairs. Brownbellies, though not much bigger than monkeys, hunt in packs of a hundred or more, and so are far more dangerous than larger breeds. The shadow-wing wyvern is nocturnal, with black scales and wings that make it invisible in the dark, and therefore is the most feared.[2]

Wyvern Point in northern Sothoryos is named after the creature, which hunts above its swamps and jungles.[4] In Westeros, the sigil of House Vyrwel of Darkdell depicts a wyvern.[5] The castle of Dragonstone includes wyverns among its stone gargoyles.[6][7]

In 56 AC a report came to the small council of King Jaehaerys I Targaryen from one of Lord Rego Draz's agents, which claimed that a dragon was being displayed in the fighting pits of Astapor on Slaver's Bay. It was at the same time when King Jaehaerys was looking for dragon Balerion, on which Aerea Targaryen escaped Dragonstone two years earlier. However, Septon Barth dismissed these claims, declaring that it was without a doubt a wyvern mistaken for a dragon by people who had never seen a dragon.[8]

In British heraldry, a wyvern is defined as a winged dragon with two legs and a barbed tail.[9] In A Song of Ice and Fire, all dragons have two legs, and wyverns are considered "kin" but not a subspecies of dragon.