Difference between revisions of "Rainwood"

Rainwood
The stormlands and the location of the rainwood

The rainwood is a large forest that lies on Cape Wrath in the stormlands.[1]

Misty and green,[2] the quiet rainwood is famed for its fur, timber, and amber.[3] Trees include cedars, hemlocks, maples, oaks, redwoods, sentinels, soldier pines, wormtrees, and occasionally weirwoods.[4][5] The wood is full of caves.[5] Although it is rainy, the region is fertile enough.[6]

Strongholds in the rainwood are often integrated with the surrounding forest.[3] Mistwood is located in the southern rainwood, while Rain House is found in its northeast.[7] Because of the presence of amber, Amberly might also be situated in the forest.

The rainwood, with Storm's End looming in the background, as depicted by Paolo Puggioni in The World of Ice & Fire

The rainwood was once part of a primeval forest which also included what is now the kingswood and was inhabited by children of the forest. The children tolerated the building of First Men villages along the forest's streams, but conflict broke out over the First Men's use of timber.[4]

Durran Godsgrief of Storm's End claimed the forest for the First Men, leading to generations of warfare between House Durrandon and the children. The woods witch known as the Green Queen held the forest for almost a generation.[8]

Much of the rainwood was conquered during the coming of the Andals, but King Baldric I Durrandon encouraged the Andal warlords to fight amongst each other. The children of the forest gradually disappeared from the rainwood after the First Men and Andals made peace.[9]

Half of the rainwood burned in 8 AC after an attack by Dornishmen during the First Dornish War.[10]

Drought during the reign of King Aerys I Targaryen led to fires in the rainwood.[11]

Among King Aerys II Targaryen's unrealized schemes was the idea to bring water from the rainwood to Dorne via a canal beneath the Red Mountains.[12] 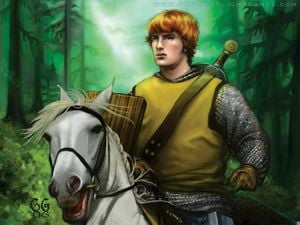 A knight of the rainwood, by C. Griffin © Fantasy Flight Games

Ser Dermot of the Rainwood tells knightly stories of the forest while at Darry.[14]

During the landing of the Golden Company, their gathering point is a deserted coastal stretch near the edge of the rainwood. The Golden Company then marches against nearby Griffin's Roost.[15]

At Ghost Hill Nymella Toland and Valena Toland tell Princess Arianne Martell there is talk of elephants in the rainwood.[16]

Princess Arianne Martell and her party travel through the rainwood on the way to the Griffin's Roost.[5]

Here the trees rule, it is said, and the castles oft seem as if they have grown from the earth instead of being built. But the knights and lords of the rainwood have roots as deep as the trees that shelter them, and have oft proved themselves steadfast in battle, strong and stubborn and immovable.[3]

Dusk found them on the fringes of the rainwood, a wet green world where brooks and rivers ran through dark forests and the ground was made of mud and rotting leaves.[5]