Year 13 After the Conquest (13 AC) is a year in the Westerosi calendar, the 13th after Aegon's crowning in Oldtown that maesters and educated people use as a reference to date the years.

In 13 AC the princess Meria of Dorne died, and his son and heir Nymor Martell sent his daughter Meria to King's Landing with a sealed letter for Aegon. The content of the letter, unknown to this day, convinced the king to put sign a peace agreement. Thus ended the First Dornish War, after 9 years of fighting. 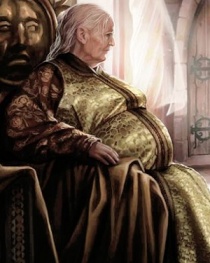 Meria Martell, the Yellow Toad of Dorne, as depicted by Magali Villeneuve in The World of Ice & Fire.