A Clash of Kings-Chapter 22

As envoy to King Renly Baratheon, Catelyn arrives at Bitterbridge to find a great melee in progress. Afterward, the champion Brienne of Tarth is granted her request to become one of Renly's Rainbow Guard. That night Catelyn attends a feast and meets privately with Renly, who insists Robb must bend the knee to him. Then, a messenger arrives with news that King Stannis Baratheon has besieged Storm's End.

A cruel dawn wakes Catelyn from sweet dreams of happy family life. She is weary of riding, hurting, and being strong, but she knows she cannot allow herself to be weak today. Outside her tent, she finds Shadd stirring oats into a kettle. Ser Wendel Manderly suggests supplementing this with roast quail, but Catelyn decides oats and bread are sufficient since they have many leagues to travel.

Her party includes twenty of Robb's best Winterfell men and five lordlings, including Ser Wendel, Ser Perwyn Frey, Lucas Blackwood, and Robin Flint, to add weight and honor to her negotiations with King Renly. It is a mission Catelyn never wanted, but Robb insisted he had no one else: Lord Hoster Tully was too ill, and he needed Ser Brynden Tully to command his scouts and Ser Edmure Tully to hold Riverrun when he marched. Catelyn argued that marching was rash, but Robb insisted waiting would make him look afraid and weaken his position, especially since Lysa Arryn will not support him. Catelyn feared he planned to play into Tywin Lannister's hand and march on Harrenhal, but Robb countered that he said nothing of Harrenhal. Catelyn smiles at the memory of Robb's obvious ploy of threatening to send Greatjon Umber in her place, given how ill-suited the Greatjon is to treat with a man like Renly. Before leaving, she wrote to Bran and Rickon and visited her father but he mistook her for her mother.

Half a day's ride from Renly's camp they are spotted from a windmill and intercepted by Ser Colen of Greenpools with twenty men. When Catelyn announces herself as the envoy of the King in the North, Ser Colen insists that Renly is king of all the Seven Kingdoms and escorts her to his camp at Bitterbridge, where the roseroad crosses the Mander. With nearly all the chivalry of the south behind him, Renly's camp is immense. Thousands of cookfires cloud the air and a vast menagerie of banners fly from a veritable forest of staffs. Monstrous siege engines line the road, tents and pavilions dot the landscape, and the whole place bustles with people. Everywhere Catelyn sees the golden rose of House Tyrell and across the river Renly and his storm lords have raised their own standards. Catelyn recognizes many of the sigils, but for each one she knows there are a dozen she does not, all assembled to make Renly a king.

Passing through a line of pavilions, they come upon a tourney melee taking place beneath the battlements of a small castle. Less than a score of contestants remain ahorse, cheered on by hundreds of spectators. Since penetrating the crowd proves difficult, Ser Colen asks that Catelyn's escort wait while he presents her to the king. A roar goes up when a knight of House Tarth in cobalt armor unhorses Red Ronnet Connington, but the carnage makes Catelyn think it mad for Renly to be playing at war with real enemies all around.

Among the lords and ladies in the gallery, Catelyn recognizes stout Lord Mathis Rowan, delicate Lady Arwyn Oakheart, and martial Lord Randyll Tarly, but others she knows only by sigil or not at all. The handsome King Renly sits in their midst, looking like a youthful ghost of his brother Robert and laughing with his young queen Margaery Tyrell, a girl of Robb's age with a shy smile and curly brown hair. Catelyn knows their marriage is the mortar of the great southron alliance, and the rose sigil and green-and-gold colors of House Tyrell are prominent in Renly's slender crown and velvet tunic. 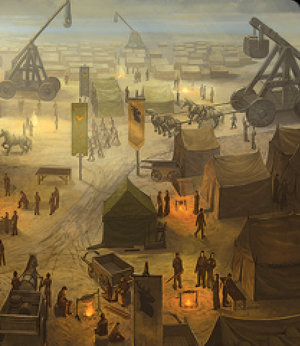 Out on the field, only four men remain and both king and commons obviously favor young Ser Loras Tyrell in his silver mail and rainbow cloak. Two others ally against the blue-clad knight from Tarth but are quickly unhorsed. Forced to discard his now-broken shield for the final duel, the blue knight is at a disadvantage and soon disarmed by Ser Loras. Yet as Loras prepares the final blow, the blue knight charges into it, grapples him to the ground, and opens Tyrell's visor with a dirk to make him to yield.

As the blue knight salutes the king in victory, squires rush to help Loras Tyrell remove his helm and Catelyn is startled by his youth and beauty. Renly then bids the champion to approach and there are a few cries of "Tarth!" and, oddly, "A Beauty!" but most remain silent. Renly declares the blue knight to be all his father claimed since Loras is rarely unhorsed, but Catelyn overhears accusations of trickery from the crowd. When she asks why the man in blue is so disliked, Ser Colen explains that the champion is no man but Brienne of Tarth, the daughter of Lord Selwyn the Evenstar, who is often called "Brienne the Beauty," though never to her face.

King Renly officially declares Brienne the champion as the last mounted of 116 knights and offers her any reward within his power. Brienne asks to be made one of his seven Rainbow Guard and Renly agrees. It is only when Brienne removes her greathelm that Catelyn understands Ser Colen's words: the only thing beautiful about Brienne are her girlish blue eyes. Her face is broad, coarse, and freckled, with a large mouth full of crooked teeth and a nose that has been broken more than once. Catelyn is filled with pity for the girl, yet Brienne looks anything but unfortunate when Renly fastens the rainbow cloak to her shoulders, and her face lights up with a smile as she proudly pledges to give her life for him.

Ser Colen interjects to introduce Catelyn, though she needs to insist that Robb is King in the North as well as Lord of Winterfell. Renly looks surprised, but greets her warmly and introduces his queen, who offers condolences for her husband's death. Renly even swears to bring her Cersei Lannister's head when he takes King's Landing, but Catelyn replies that justice will be enough. Brienne of Tarth notes that Catelyn should kneel and refer to the king as "Your Grace," but Catelyn insists they have more pressing matters to discuss. Some of Renly's lords bristle, but the king only laughs and asks when Robb plans to march on Harrenhal. Unsure whether Renly will be a friend or a foe, Catelyn only replies that she does not sit on the war council. Renly asks about Jaime Lannister and, learning he is a prisoner, declares that the direwolf is gentler than the lion. Lord Randyll Tarly pipes up that Robb should have come to pay homage in person, but Catelyn counters that her son is fighting a war, not playing at one. Renly grins and warns Lord Tarly that he is outmatched, then offers Catelyn the use of his own pavilion (since he is guesting at Lord Lorent Caswell's castle) and invites her to the evening's farewell feast.

Renly's pavilion is so massive and richly furnished that Catelyn understands why his host moves so slowly, and that evening she is seated between Mathis Rowan and Ser Jon Fossoway. Meanwhile, Brienne of Tarth is seated at the far end of the high table in knight's garments instead of a lady's and Catelyn notes that out of her armor Brienne looks muscular, plain, and ungainly, and judges from the woman's actions that she knows it. 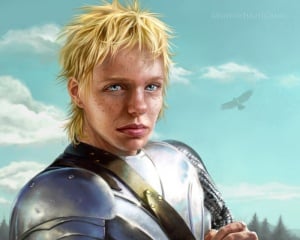 Singers and tumblers entertain them, and the food is rich and plentiful, but Catelyn eats only sparingly and watches those around her. King Renly speaks amiably to all and sometimes feeds Queen Margaery choice morsels or kisses her lightly, but it is Ser Loras who shares most in his jests and confidences. Others are less moderate: the brothers Josua and Elyas Willum dispute who will be first over the walls of King's Landing, Lord Varner dandles a serving girl, Ser Guyard Morrigen sings a bad song about knotting lions' tails, Ser Mark Mullendore feeds his pet monkey from his plate, and Ser Tanton Fossoway climbs onto the table and swears to slay Sandor Clegane in single combat.

When a gold-dressed fool and a dwarf elicit gales of laughter by mocking Jaime and Tyrion Lannister, Lord Rowan remarks to Catelyn that Renly and his favorites are all very young. Seeing Lord Bryce Caron goad Ser Robar Royce into juggling daggers, Catelyn recalls that none of them are old enough to have seen war, so they think it is a game and believe themselves immortal. She tells Lord Rowan that war will make them old, as it did her generation, and says she pities them because they are the knights of summer and winter is coming. Brienne chimes in to disagree, saying:

Winter will never come for the likes of us. Should we die in battle, they will surely sing of us, and it’s always summer in the songs. In the songs all knights are gallant, all maids are beautiful, and the sun is always shining.

Catelyn knows that winter comes for everyone, as it did for her when Ned died, but King Renly saves her from having to say so by asking her to take the air with him. Brienne wants to come along as well, but Renly insists another sword will make no difference in the midst of his own army. Brienne seems very hurt by the refusal.

As they walk, Renly asks if Ser Barristan Selmy has joined Robb at Riverrun. When Catelyn seems puzzled, Renly tells her of Selmy's dismissal and his vow to serve the true king, adding that Brienne's position in the Rainbow Guard was meant for Selmy. Next, Renly explains that he offered Ned a hundred swords to seize Joffrey but fled when refused because he lacked the strength to act alone and feared Cersei meant to kill him after Robert died. He adds that he liked Ned well enough and knew him to be Robert's loyal friend, but says Ned would not listen or bend.

Leading her out onto the roof, Renly shows Catelyn his army's countless campfires and asks how many fires burn around Riverrun. He guesses that Robb has 40,000 men at most, though Catelyn knows the real number is much lower. Renly declares that he has twice as many with him, and another 10,000 with Mace Tyrell at Highgarden, a strong garrison at Storm's End, and soon all the power of Dorne and his brother Stannis Baratheon on Dragonstone. Catelyn counters sharply that Renly seems to have forgotten that Stannis has the better claim. Renly replies that Stannis is respected and feared but not loved and would make an appalling king. Gesturing to his army, Renly declares that his claim is as good as Robert's ever was.

Then he offers terms: Robb can rule in Winterfell and even go on calling himself King in the North, but he must bend the knee to Renly as his overlord. When Catelyn asks the consequences of refusal, Renly insists he means to be king of a united realm and reminds her that Torrhen Stark was wise to yield to Aegon I Targaryen, adding that if they join together the war is good as done.

Just then, a messenger rides into the yard with news that Storm's End is under attack, although Ser Cortnay Penrose defies the besiegers. When Renly protests that he would know if Lord Tywin had left Harrenhal, the messenger replies that these are no Lannisters; it Lord Stannis at the gates, calling himself King Stannis.