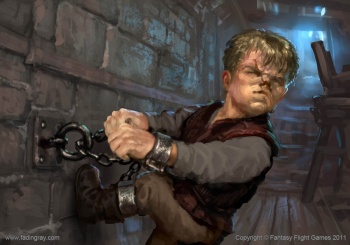 Tyrion, chained to the wall for the night. © FFG

Tyrion and his captor arrive at Volantis, where Tyrion is put in chains so he will be taken for a slave and thus no one will listen to or help him. Tyrion tells his captor he knows that he is Ser Jorah Mormont and that Jorah has been working for Varys. Tyrion further explains that he is also on a mission from Varys, thus making them allies, but Jorah is unmoved by his argument.

Jorah takes a room in the Merchant's House, chaining Tyrion to the wall for the night. The next day, they hear that the Golden Company (which Tyrion knows was hired by Aegon Targaryen and Jon Connington) is headed west, putting an end to Tyrion's hopes of being rescued by them in Volantis.

In the morning they head into the dining hall of the Merchant's House, where Tyrion sees another dwarf and notices that he has been recognized. He tells Jorah, who is not concerned. Tyrion later reflects that this other dwarf seems somehow familiar. They then talk to the widow of the waterfront, a former slave and now the powerful widow of a triarch of Volantis, who is sympathetic with Daenerys Targaryen's actions. Jorah tells her that he needs to book swift passage to Meereen and Daenaerys. She asks Jorah why he seeks Daenerys and he answers, "To serve her. Defend her. Die for her, if need be." The widow does not trust his motives, however.

Suddenly, a chaotic fight breaks out. Tyrion is attacked by the knife-wielding dwarf, but Jorah effortlessly rescues him. Tyrion realizes this dwarf is a girl, and upon questioning her, they learn that the she is Penny, one of the tilting dwarfs from Joffrey's royal wedding. Her brother, also a dwarf, was mistaken for Tyrion and beheaded by sailors, but she was set free when they realized she was a girl.

The widow instructs Tyrion to take the Selaesori Qhoran, a trading cog which is destined to Qarth by way of New Ghis, but Benerro has foretold that it will not reach this destination. She gives him a message to deliver to Daenerys from the slaves of Old Volantis: "Tell her we are waiting. Tell her to come soon."