Still on board the Selaesori Qhoran, Tyrion jousts on Penny's 'Pretty Pig', for the amusement of the crew in hopes of sweetening their mood, while the ship has been floating becalmed in the Gulf of Grief. Attempts to tow the cog north in hope of finding a breeze, using small rowing boats, have been unsuccessful.

Tyrion and Penny are talking when the ship suddenly starts to move. Everyone cheers until they notice the storm front looming on the horizon. Moqorro states that this is the storm from his visions (the reason that the ship won't reach Qarth). During the storm, the main mast breaks, crippling the ship. Moqorro and others are swept overboard, the captain and the cook die, and Tyrion is wounded from a splinter. For 19 days the ship barely manages to stay afloat as food and water dwindle and the sun beats down on them relentlessly. Then a sail turns up on the horizon, reigniting hope in them until Jorah realizes it's a slaver ship. 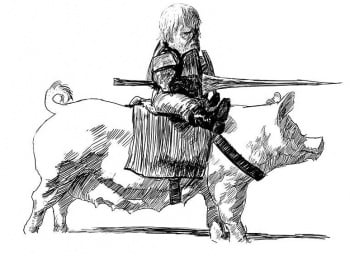