Daenerys Targaryen wakes up beside Daario Naharis. She is hesitant about her upcoming wedding. Daario asks her to marry him instead, but truly he knows that she cannot and will not. Outside the Yunkai are massing more ships, building siege weapons to throw rocks at the city. However, no rams or siege towers are built, as the siege is intended to cause famine and disease to force Meereen to succumb.

Daario introduces Dany to the three Dornishmen who say that they have specific gifts for the queen. Quentyn Martell, Gerris Drinkwater, and Archibald Yronwood, who defected to Daario, reveal themselves to her. A parchment is presented, describing a secret pact of alliance between Dorne and the Targaryens signed by Willem Darry and Oberyn Martell, that would be sealed by a marriage between Viserys and Arianne Martell. Dany laughs when she learns who Quentyn is, as his mercenary nickname was Frog, and she remembers the story of a frog turning into a prince.

Dany remembers Quaithe's earlier prophecy. The glass Candles are burning. Soon comes the pale mare, and after her the others. Kraken and Dark flame, lion and griffin, the sun's son and the mummer's dragon. Trust none of them. Remember the Undying. Beware the perfumed seneschal. She recognizes Quentyn and the arms of House Martell as the sun's son she must be wary about.

Daenerys refuses to marry Quentyn. The Dornishmen make one last plea before Dany's wedding which she denies, and then goes through with her marriage to Hizdahr zo Loraq. 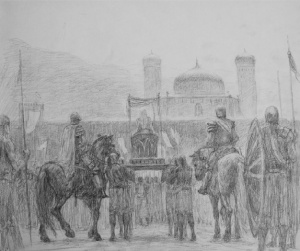