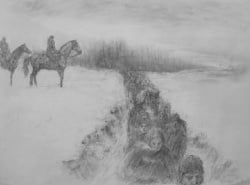 The Free Folk march to the Wall - by Marc Fishman ©

Tormund Giantsbane along with over three thousand wildlings pass the Wall at Castle Black. The price of their entry, which was negotiated between Jon and Tormund, is that the wildlings will yield all valuables so that they can be sold for food, as well as one hundred boys as hostages. Initially, two girls are included in the one hundred hostages, although Jon spots them and they are replaced by two new boys. Tormund voluntarily includes his own son as a hostage as a sign of good faith. Jon decides to take him on as his own squire.

While watching the Wildlings pass through the wall, Jon and Tormund speak of many things. Jon mentions that Melisandre burned the horn of Joramun that Mance and the wildlings were supposedly going to use to break down the Wall. Tormund tells Jon that although they did find that huge horn in the Skirling Pass, it is not actually the true Horn of Joramun, or they would have used it when they assaulted the Wall. Jon, confused, tries to decide whether it was Mance that lied to him or Tormund lying to him now about the authenticity of the horn.

The rear guard of the Wildings with Tormund includes a warg who is accompanied by his boar. Ghost and this boar seem to be on edge around each other, and it is mentioned that they should be restrained while the wildings are staying at Castle Black. Most of the wildlings will be relocated in the coming weeks.

Later, Jon receives a letter from Cotter Pyke, saying that he is stranded at Hardhome, and calls for help. He also reveals that the Braavosi captains on loan from Tychos would only allow wildling women and children aboard their ships, and that the Woods Witch has taken to calling them slavers. This explains Arya's report that the wildlings from Hardhome had been captured by slavers, as narrated in "The Blind Girl". He also says there are dead things both in the woods and the water, lending a great deal of urgency to his message.