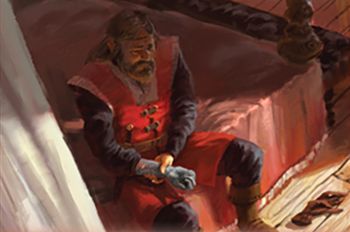 Jon Connington has been infected with greyscale. © Fantasy Flight Games

Jon Connington and the Golden Company have landed at Cape Wrath in Westeros, and manage to seize Griffin's Roost and other small castles by taking them unawares. The taking of Griffin's Roost was quite easy; the Golden Company only lost four men in the attack. Any raven trying to leave the castle was shot down, followed shortly by the castle's maester being thrown from his tower. After that, what was left of the garrison surrendered.

Taking his leave of the Golden Company officers by claiming to be going to pray at his father's tomb in the castle sept, Jon instead goes to the battlements and reminisces over the time Rhaegar visited his home and seemed impressed with Connington's lands. Jon then reflects on what happened next to his House; after Aerys exiled Jon, furious at his failure to stop Robert, the lands and title went to his cousin Ronald Connington (who had been Jon's castellan while he was in King's Landing) but after the end of Robert's Rebellion, King Robert stripped Ronald of his lordship and gave most of House Connington's lands to houses that had fought for him. Jon, however, is glad that he will not have to fight his deceased cousin or Ronald's son Ronnet, who is away fighting in the Riverlands, to reclaim Griffin's Roost, not wanting to celebrate his return by killing one of his own kin. Nor does he blame his cousin any longer for taking advantage of his downfall, since as far as Jon is concerned, the one responsible for House Connington's downfall is himself.

Jon's musings then turn to where he lost everything: Stoney Sept. Taking over pursuit of Robert from the Tyrells after the Battle of Ashford, Jon cornered the rebel in the town and began searching for him. But the search yielded nothing, as the townsfolk were protecting Robert, hiding him and constantly moving him. All of Connington's efforts to find Robert- offering bribes for information, taking hostages, threats and pardons- got him nowhere, and the delays bought time for Eddard Stark and Hoster Tully to bring a rebel army to Robert's rescue. The rebels attacked Connington's men at the same time Robert and his followers emerged from the town in a counterattack, and the ensuing battle ended in a rebel victory. For years, Jon reflects that he insisted he did all he could, until Myles Toyne disabused him of that notion by pointing out that Tywin Lannister would have burned Stoney Sept to the ground to kill Robert, then offered pardons to Stark and Tully when they arrived to convince them to give up and go home. Connington, however, knew this would mean killing everyone in the town, and he both didn't want to be branded a murderer and wanted the glory of slaying Robert for himself. Jon reflects that his failure at Stoney Sept led to Rhaegar's death at the Trident and vows not to fail Prince Aegon as he failed his father.

Re-joining his fellows, Jon takes note of the captives, including Ronnet's brother, sister and bastard son. Most of the castle staff swear loyalty to him. Connington pays a visit to Haldon, who is trying to interpret where most of the Golden Company, scattered along the coast by the Volantene ships that transported them from Essos to send a message to Doran Martell to inform him that his nephew Aegon is alive, in order to gain the Dornish alliance. Jon reflects that he could not have expected loyalty from these men if he had reclaimed his home while Robert and Renly still held the Stormlands. Haldon also argues that they need to offer incentives to convince recalcitrant lords to join them-as most of the gold and land will go to the Golden Company officers that was taken from their ancestors, Haldon suggests offering the hands of Prince Aegon and Jon himself for marriage alliances. Jon, however refuses, in the face of his illness and his insistence that Aegon must be free to wed Daenerys Targaryen if she ever returns home. In his chambers, Jon privately treats his greyscale with wine. If his condition became known, he fears that any lords still loyal to House Connington would abandon him.

Four days later, Prince Aegon arrives along with Duck, the first member of his Kingsguard. Jon recalls his disapproval of that choice and how he argued with Aegon that they should leave places in his Kingsguard open to both warriors of great renown or the younger sons of important lords to add lustre to their cause, but Aegon refused, saying all he wanted from his Kingsguard was their willingness to die defending him, pointing out that Jon's criteria for the Kingsguard perfectly fits the Kingslayer. Jon informs him that his men plan to take Storm's End in ten days (he had refused the suggestions of the Golden Company officers to make an alliance with Stannis Baratheon, who holds it, arguing that Stannis is Robert's brother, a rival claimant to the throne and leagues away from them with nothing to offer). Aegon agrees to this plan, and tells him that he intends for the siege to go forward with one change: Aegon will lead the attack himself.