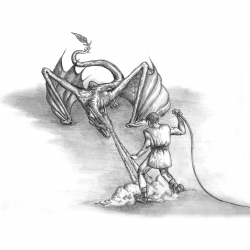 The Dragontamer by Ashley Hunter Rice

Quentyn goes ahead with his plan to steal the dragons. With the help of the Windblown Company, they make it to the pit where Rhaegal and Viserion are kept. There, however, they use the codeword "dog" on the Brazen Beasts, who are actually part of the scheme to overthrow the king that very night. A fight ensues, and the four guards are slain, although Quentyn is almost slain by a spear. They enter and find that Rhaegal has also broken his chains since he was last in the pit, and that Viserion has created a cave for himself in the ceiling of the pit. Viserion is first attracted to Pretty Meris, as he is looking for Daenerys, but then tries to exit the pit. Throughout this encounter, Quentyn tries to dominate the dragons like he had seen Daenerys do with Drogon, but when he strikes Viserion with a whip, Rhaegal spews fire on him, setting him aflame.