Ned and King Robert discuss the threat posed by Daenerys Targaryen's marriage and the events surrounding the Sack of King's Landing. 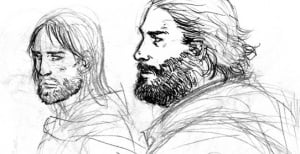 "I swear to you, I was never so alive as when I was winning this throne, or so dead as now that I've won it" - by Pojypojy ©

Ned is woken before dawn to find his horse saddled and King Robert waiting. When the king claims to have urgent matters of state to discuss, Ned invites him to come inside. Robert refuses, claiming that the camp is full of ears, so Ned dresses and mounts up.

Robert sets a hard pace and soon the pair leave the kingsroad to ride through the barrowlands. They do not stop until dawn, miles south of the main party. Exhilarated by the ride, Robert complains of the glacial pace of Cersei’s wheelhouse and jokingly suggests that he and Ned run off to live as vagabond knights. Ned laughs and reminds Robert of their duties and that they are no longer the boys they once were. Robert jokes that Ned never was the boy he once was, then tries to recall the name of the woman Ned fathered Jon Snow with. Ned provides the name Wylla, but coldly refuses to say more about her.

Robert finally gets to the business at hand: a message from the eunuch Varys, his master of whisperers in King's Landing. Ned reads the message with some trepidation, thinking of Lysa Arryn and her terrible accusation, but finds that it concerns the wedding of Daenerys Targaryen to Khal Drogo. When Robert explains that the information has come from Ser Jorah Mormont, Ned takes offense, recalling Mormont as a fugitive who fled the King’s justice after selling some poachers to a Tyroshi slaver in defiance of the law.

The news of the wedding does not worry Ned, but when Robert angrily suggests an assassination attempt he is not surprised. Since the days of the rebellion, Robert has held a hatred for the Targaryens that seems a madness to Ned. Ned recalls the angry words that passed between Robert and himself when Tywin Lannister presented Robert with the corpses of Rhaegar Targaryen’s wife Elia and children Aegon and Rhaenys as tokens of fealty. Ned called it murder but Robert called it war. It took the death of Lyanna to reconcile them again.

This time Ned keeps his temper, telling Robert that he is no Tywin Lannister to slaughter innocents. Robert angrily insists that Daenerys will not remain an innocent forever and will soon breed more “dragonspawn” to plague him. When Ned reiterates that killing a child would be unspeakable, Robert responds that what Aerys did to Ned’s father and brother and what Rhaegar did to Lyanna were unspeakable.

When Robert mentions that Drogo has 100,000 men in his horde, Ned insists that even a million Dothraki are no threat to the realm without ships. Robert replies that ships can be found in the Free Cities and that many in the Seven Kingdoms—particularly in Dorne and the Reach—would not hesitate to join a Targaryen invasion. Despite this, Ned remains convinced that they would be able to drive the Dothraki back, emphasizing the importance of appointing a new Warden of the East. When Robert refuses to appoint Jon Arryn’s son Robert, Ned suggests the king’s own brother, Stannis. When Robert continues to be evasive, Ned quickly deduces that he has already promised the office to Jaime Lannister. Ned reminds Robert that Jaime already stands to succeed Tywin Lannister as Warden of the West and that as Warden of both East and West, Jaime would control half of all the realm’s armies.

Ned asks whether Jaime can be trusted. When Robert asks why he shouldn’t trust Jaime, Ned reminds him that Jaime betrayed and killed the last king he was sworn to protect. To illustrate his point about Jaime Lannister, Ned describes to Robert how, after the Battle of the Trident, he followed Rhaegar's army back to King's Landing to find the city sacked by the Lannisters. Ned goes on to explain that upon entering the throne room, he found King Aerys dead on the floor and Jaime sitting on the Iron Throne. Although Jaime eventually rose to say that he was only keeping the uncomfortable thing warm for Robert, Ned insists that Jaime had no right to sit the throne.

Robert finds this amusing and does not consider Jaime's "great sin" to be that bad. He gallops off but Ned pauses, despairing of ever keeping Robert from making mistakes. He still believes he should be in Winterfell with his wife and Bran. Finally, resigned to not being able to be where he belongs, Ned follows his king.

This page uses content from Wikia. The original content was at A Game of Thrones: Chapter 12. The list of authors can be seen in the page history. As with A Wiki of Ice and Fire, the content of Wikia is available under the GNU Free Documentation License.