As they travel north Tyrion and Jon Snow argue about the realities of life on the Wall.

After a fortnight riding north from Winterfell with Benjen Stark, Jon Snow, and two of his own retainers, Tyrion is amazed by the enormous size of the North. Although he knows the maps of the region as well as anyone, the land itself is quite another thing. It has grown colder, quieter, and far lonelier the farther north they go and the Kingsroad has narrowed to a wild track.

Three days out of Winterfell the farmland has given way to the dense, dark forests of the Wolfswood. There they meet up with Yoren, a brother of the Night's Watch, accompanied by two peasant boys condemned to join the Watch. That night Tyrion notices Jon Snow looking at their new companions with dismay and feels sorry for the boy who has had such a hard life chosen for him. Tyrion feels less sympathy for Benjen Stark, who apparently shares his brother’s distaste for Lannisters and seems intent on making Tyrion’s journey north as uncomfortable as possible. However, Tyrion does take a small bit of revenge when he accepts a tattered old bearskin cloak from Benjen, a gift Tyrion thinks Benjen did not expect him to accept and is probably regretting.

By the eighteenth night of their journey the inns and settlements have long since disappeared, forcing the party to make camp. Being too small to help, Tyrion (as is his custom) goes away from the camp with a book about dragons, one of several brought with him from Winterfell. Tyrion has always been interested in dragons. He remembers seeking out the dragon skulls in King's Landing the first time he was there. He recalls having a torch with him when he discovered the skulls and having the sensation that they seemed to like it when he put his torch to them. There were three skulls much larger than the others and one of the skulls could have swallowed a mammoth whole. Tyrion recalls that King Loren I, an ancestor of the Lannisters, had been about to defeat Aegon I Targaryen in battle when the Targaryens unleashed all three of their dragons and made short work of their opponents.

As Tyrion reads he is approached by Jon Snow, who asks why he reads so much. Tyrion explains that because his body is twisted and weak he must rely on his mind and that a mind needs books like a sword needs a whetstone. When Jon asks what Tyrion is reading, Tyrion begins to explain about dragons and how he fantasized about them as a child when feeling resentful toward his family. 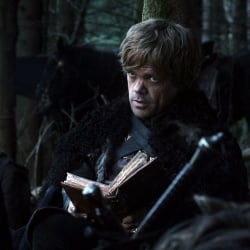 "A mind needs books as a sword needs a whetstone." (TV series)

When Tyrion goes so far as to suggest that Jon must feel resentment towards his own family, Jon protests. However Tyrion continues to push the issue, sarcastically describing how Lady Catelyn treats him as one of her own, how Robb is kind because he is the heir, and how Eddard Stark must have had a good reason to pack Jon off to the Wall. When Jon replies that the Night’s Watch is a noble calling, Tyrion describes the Watch as a midden heap for the realm’s debtors, poachers, rapers, thieves, and bastards, all kept busy watching for imaginary grumkins and snarks.

When Jon asks him to stop, Tyrion realizes what he has been saying and feels badly. Reaching out to comfort Jon, he is attacked and knocked down by Jon’s direwolf, Ghost. Unable to get up on his own, Tyrion is forced to apologize to Jon before receiving help. When Tyrion questions why the wolf attacked, Jon jokes that Ghost must have mistaken Tyrion for a grumkin, which amuses them both.

Having calmed down, Jon asks Tyrion if the things he said of the Night’s Watch were true. When Tyrion says yes, Jon accepts the truth grimly. The two share some wine and return to camp for a supper of squirrel stew. Tyrion is the last to retire, and Jon has the first watch.

This page uses content from Wikia. The original content was at A Game of Thrones: Chapter 13. The list of authors can be seen in the page history. As with A Wiki of Ice and Fire, the content of Wikia is available under the GNU Free Documentation License.