Catelyn's breakdown over Bran's fall ends when an attempt is made on Bran's life. Catelyn delays the assassin long enough for Bran's direwolf to arrive and kill the assassin. Catelyn is now convinced Bran did not fall, but was pushed.

Eight days after Eddard and the others have left Winterfell, Catelyn is still sitting at Bran's bedside in her fragile mental state. Maester Luwin comes to tell her how much the king's visit has cost them, but Catelyn is not interested in looking at figures. Regardless, the maester continues to speak of replacing provisions. Catelyn insists that the steward can worry about such matters. Luwin reminds her that Vayon Poole went south with Lord Eddard and needs to be replaced, along with a number of other positions. Catelyn is outraged that he can think of such trivial things when Bran is dying until Robb arrives to take charge of the appointments.

After the maester leaves, Robb asks Catelyn what she thinks she's doing spending all her time with Bran and not even saying farewell to her own family. Catelyn insists she can't bear to be away from Bran, in case he should die. Robb assures her that Bran is not going to die and reminds her that her other children need her, too. He goes on to explain that Rickon just follows him around all day crying, thinking everyone has abandoned him.

Robb hears a direwolf howling outside and opens the window, explaining that the sound seems to be good for Bran. When the other direwolves join in, Catelyn screams for Robb to make the noise stop and then collapses to the floor. Robb helps her up but she only begins screaming again. Then Robb notices the dogs barking as well and sees the library tower afire.

While Robb rushes off to fight the fire, Catelyn remains behind with Bran. When she turns away from the window, however, she is face-to-face with a filthy man brandishing a knife. The man claims that Catelyn was not supposed to be there and moves towards Bran, claiming that killing him would be a mercy. Catelyn attempts to scream for help, but the man is too quick as he moves to slit her throat. Catelyn manages to grab the blade with her hands and push it away, cutting her fingers badly. She bites the man's hand and fights her way free. The man is about to attack her again when Bran's direwolf leaps onto him and rips out his throat. Once the man is dead, the direwolf settles down on Bran's bed. 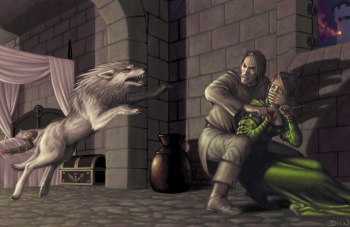 Catelyn is taken back to her chambers. Old Nan undresses her and helps her into a bath. After the bath, Maester Luwin dresses Catelyn's wounds: her fingers are cut almost to the bone and the man had pulled out a handful of hair. The maester gives her milk of the poppy, which puts her to sleep. She wakes up four days later. It seems like a nightmare, but the pain in her hands reminds her that it was real. When Catelyn remembers her behavior since Bran's fall she is ashamed, promising herself that it will not happen again.

Robb, now wearing armor and a sword, comes to see her with Theon Greyjoy, Ser Rodrik Cassel, and Hallis Mollen, the new captain of the guard. Hal tells her that nobody knows who the man was, but he had likely been lurking in the stables since the king's visit. Where the man had been hiding they found ninety silver stags hidden under the straw. When Robb asks why anybody would want to kill Bran, Catelyn insists that as a lord he must learn to answer his own questions. Robb guesses that somebody is afraid of what Bran might do or say if he wakes up and so posts a heavy guard on Bran.

Rodrik points out that the dagger used by the assassin, a Valyrian steel blade with a dragonbone handle, is a much finer weapon than anything the low-born footpad should have possessed; someone must have given it to him. Catelyn then tells Rodrik, Theon, and Robb in strict confidence of her sister Lysa's suspicions about the death of Jon Arryn. She reminds them that Jaime Lannister did not go hunting with the others the day Bran fell, and that she does not believe that Bran fell, but that he was pushed. The group admits that this is a reasonable conclusion.

However, Maester Luwin points out that all they have is conjecture, and that they must have proof or else keep silent. After some deliberation, Catelyn decides that she and Rodrik will go to King's Landing by ship to inform Eddard, hopefully arriving ahead of the king’s party.

This page uses content from Wikia. The original content was at A Game of Thrones: Chapter 14. The list of authors can be seen in the page history. As with A Wiki of Ice and Fire, the content of Wikia is available under the GNU Free Documentation License.