Immediately upon his arrival in King's Landing, Ned is summoned to a meeting of the small council to plan a tournament. Afterward, Littlefinger intercepts him and leads him to where Catelyn is hiding, where they plan their strategy for justice.

Ned arrives in King's Landing tired and ready for a meal and a hot bath. Instead, he is immediately informed by the royal steward that there is an urgent meeting of the small council that he must attend. After momentarily losing his temper, Ned decides it is best not to offend the council on his first day in the capital. Therefore, he tasks his own steward to see that his daughters are guided to their rooms and that Arya is not allowed to go exploring.

In borrowed clothes (his are all still packed), Ned arrives to find four members of the council waiting for him: Littlefinger the master of coin, Varys the master of whisperers, Renly Baratheon the master of laws, and Grand Maester Pycelle. The simpering eunuch Varys immediately expresses sorrow over the troubles on the road and assures Ned they are all praying for Prince Joffrey’s recovery. Ned coldly informs him that the prince grows stronger every day. When he sees Renly, Ned is struck by how much he looks like a young Robert. Littlefinger immediately quips that Renly is much better dressed, having spent more on clothes than many ladies of the court.

Upon introducing himself to Ned for the first time, Littlefinger mentions that Catelyn has most likely mentioned him before. Ned recalls that Littlefinger also knew his brother, Brandon, adding that Brandon mentioned him often and with some heat. Littlefinger responds that he would have thought heat did not suit the Starks, who are rumured to be made of ice and to melt south of the Neck. Ned replies that he does not plan on melting anytime soon. 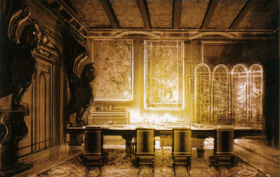 After a short greeting to Grand Maester Pycelle, Ned asks after the other members of the council and is told that Stannis Baratheon left for Dragonstone shortly after the king went north and that both Ser Barristan Selmy and King Robert are still riding through the city. When Ned suggests they wait, Renly explains that Robert finds the details of coin and crops boring and rarely bothers to attend. Then Renly says that the king sent him ahead to convene the council to handle an urgent matter and Littlefinger produces a sealed letter for Ned.

The king's letter contains an order that a tourney be held in honor of Ned's appointment as Hand of the King. Ned is incredulous and not particularly happy with this extravagance being held in his name; the prizes alone total ninety thousand gold dragons and the costs are sure to run high as well. When Ned questions whether the treasury will bear the expense, Littlefinger reveals that the Crown is already over six million gold pieces in debt, half of it to the Lannisters. Ned is shocked; the Targaryens left a treasury overflowing with gold. He cannot believe that Jon Arryn allowed Robert to beggar the realm, but the council explains that while Lord Arryn was a prudent man, Robert did not always listen. Ned insists that this tournament is something the realm cannot afford and declares that they will consider it later, then leaves abruptly.

As Ned proceeds toward the Tower of the Hand, reflecting on the miseries of the last fortnight of the journey south, he is intercepted by Littlefinger, who tells him he is going the wrong way. After a long journey through the Red Keep, Ned eventually realizes that Littlefinger is not leading him to the Tower. Littlefinger explains that he is leading Ned to his wife, but Ned does not believe him. Eventually, Littlefinger brings him to the foot of a bluff outside the castle, where they mount onto waiting horses and ride into the city.

After embracing and exchanging news with Catelyn, Ned sees the scars on her hands and she places the Valyrian steel dagger used against Bran in his hands. However, Ned cannot understand why Tyrion Lannister would have attempted to murder Bran. Littlefinger states that the reason is obvious, and that Tyrion would have never acted alone. Ned tries to assure himself that Robert could never have been involved in this, but he remembers all the horrid things the king has either supported or ignored. Queen Cersei, on the other hand, Ned has no trouble believing to be responsible. Littlefinger reminds him that to accuse either is treason, but that if they can find proof of Cersei’s involvement, it is possible the king will listen.

Ned feels that he should take his case and the dagger directly to the king, but Littlefinger reminds him that there is no solid proof that Tyrion was involved. Then Catelyn explains that she has told Littlefinger about their suspicions concerning Jon Arryn's death, and that Littlefinger has promised to help them learn the truth. When Ned asks how much Varys knows about all of this, he is told that Varys has not been told, but Catelyn warns that the man knows things no normal man has any way of knowing.

Ned then asks Littlefinger to give him time alone with his wife. Littlefinger asks if they want time in a bed chamber but Ned tells him that will not be necessary; he just needs a little time. Catelyn goes to Littlefinger and tells him that she appreciates his efforts, and has found a brother that she thought she had lost. Ned is not so confident that Littlefinger can be trusted, but says nothing. After Littlefinger leaves, Ned gives Catelyn instructions for his bannermen to fortify Moat Cailin and to keep a careful watch over Theon Greyjoy in case his father's fleet is needed. He hopes it will not come to war and that Robert will believe him when he finds out what happened.