Bran is roused from his depression when he is called to the Great Hall of Winterfell to receive Tyrion Lannister. Despite Robb’s rudeness, Tyrion provides plans for a saddle that will allow Bran to ride a horse once more.

Bran watches from his window seat as Rickon plays with the direwolves in the yard below. Shaggydog’s fur has darkened to black and his eyes are fiery-green; Summer has turned to silver-and-smoke with yellow-gold eyes that see everything. Summer is smaller and warier than Grey Wind, but Bran thinks he is the smartest. Bran realizes he is crying; he wants to be down there laughing and running. Bitterly, he declares that the crow in his dream lied about being able to fly. 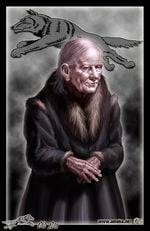 Old Nan agrees that crows are all liars and offers to tell Bran a story about a crow, but Bran is not in the mood and snaps that he hates her stories. Old Nan explains that the stories are not hers; they are, before her and after her. Bran remembers his father telling him that she was called “Old Nan” even when he was a child. Possibly the oldest person in the Seven Kingdoms, Nan has outlived all her own family except the simple-minded stableboy named Hodor. Bran insists that he hates the stories no matter whose they are. Unperturbed, Old Nan offers to tell a story about a boy who hated stories.

Bran does not want any stories; he wants his parents, and to run, and climb, and ride like before. His father had promised he could ride a real horse south, but left without him. Bran broods on all the people who have left Winterfell and seem to have forgotten him. Only Robb and Rickon remain and even Robb has changed: he never smiles now and is so busy as the lord of Winterfell that he has little time for Bran.

When Nan offers to tell him about Brandon the Builder, Bran insists that his favorite stories were the scary ones. Nan replies, “Oh, my sweet summer child, what do you know of fear?” Bran listens intently as Nan begins the story of the first time the Others came in the darkness of winter. Thousands and thousands of years ago, a winter fell like no other, and there came a night that lasted a generation. In that darkness came the Others: cold dead things that hated fire, iron, the touch of the sun, and every creature with warm blood. They overran holdfasts and cities and all the swords of men could not stop their advance. Women and children were not spared, and the Others ate the flesh of children. This was before the Andals and the Rhoynar had come, when the First Men lived in the lands they had taken from the children of the forest. The last hero of the First Men set out to find the children with his sword, a dog, his horse, and twelve companions. All of the hero’s companions and even his dog died, and he was left in despair of ever finding the children as the Others closed in.

Old Nan’s story is interrupted by Maester Luwin, who tells Bran that he is needed in the Great Hall to greet Tyrion Lannister and some men of the Night’s Watch, who are down from the Wall with a message from his brother Jon. Bran complains that he wants to hear the rest of Nan’s story, but Nan tells him that stories can wait. Hodor, the seven-foot stableboy, carries Bran down to the hall with Maester Luwin struggling to keep up.

Robb is sitting in his father’s high seat, wearing his armor with his sword across his lap. Even Bran knows what it means to greet a guest with an unsheathed sword and can feel the hostility in the room. Robb makes a point of only offering his welcome to the Night’s Watch men. The meaning is not lost on Tyrion, who notes that he is not welcome and calls Robb a boy. Robb seethes, insisting that he is a lord. Tyrion responds that if that is so he needs to show a lord’s courtesy.

When Bran is brought forward, Tyrion notes that news of his survival was true and declares that Starks are hard to kill. Robb declares that the Lannisters had best remember that and lifts Bran into the high seat. Tyrion asks how Bran fell, but Bran insists that he never falls. Maester Luwin is quick to add that Bran does not remember. Tyrion calls this curious, then asks if Bran likes to ride. Immediately, the maester insists that Bran has lost the use of his legs, and so cannot ride. Tyrion responds that with the right saddle and horse even a cripple can ride. Angered, Bran insists that he is not a cripple, but Tyrion retorts that if that is true then he is not a dwarf. Tyrion hands the maester a paper containing plans he has drawn up for a saddle for Bran. The maester states that it will work and he should have thought of it himself. Tyrion responds that the idea came easier to him, since the design is similar to his own saddle. Robb is suspicious of Tyrion’s motive, to which Tyrion replies that Jon asked it of him, and he has a weak spot for cripples, bastards, and broken things.

Rickon comes in from outside with the three direwolves, who immediately start growling and surround Tyrion. Theon comments that the wolves do not like Tyrion’s smell. Tyrion says that it is time he took his leave, but the wolves assault him before he can move more than a step. They are called off in time by the boys. Tyrion finds the hostility of the wolves to be interesting, and states nothing is harmed save his dignity. Even Robb is shaken and says he does not know why the wolves attacked. Before Tyrion can leave, Maester Luwin confers with Robb, who then offers the hospitality of Winterfell to Tyrion. Tyrion declines the invitation as a false courtesy, declaring that he will stay in the inn he saw outside the wall.

Robb then tells the Night’s Watch men they have rooms prepared, and invites them for dinner. Bran is looking forward to feasting that night with the Night’s Watch. In his room, Bran expresses his excitement at being able to ride again to Summer. Bran dreams of climbing, and sees the shapes of twisted and grotesque gargoyles, and then he hears them whispering. The gargoyles pull themselves free and climb towards Bran. Bran starts to scream, shouting that he did not hear. He wakes to find Hodor above him. Hodor cleans and dresses him and carries him down to the Great Hall.

That evening, Robb and Bran host the Night’s Watch men for dinner. The black brothers bring the dire tidings of Benjen Stark. Yoren states that Benjen is probably dead, but Robb vehemently disagrees. One of the brothers assures them that Benjen knows the haunted forest better than anyone, and will find his way back. Bran thinks of Old Nan’s stories and blurts out that uncle Benjen will be saved by the children of the forest. Maester Luwin tells him the children have been dead for thousands of years, but Yoren disagrees, wondering who’s to say what lives beyond the Wall?

That night Robb carries Bran up to his bed himself. Robb sits by Bran for a long time, and tells him that they will find a horse for him. Bran asks if the others will be coming back. Robb says yes with much hope in his voice. Robb then tells Bran that he can meet his mother riding his new horse and later they can visit the Wall together.