Ned speaks with Grand Maester Pycelle about Lord Jon Arryn's final days. On his way back, he finds Arya training to be a water dancer on the steps of the Tower of the Hand. Later, he is visited by Littlefinger who has found four of Lord Arryn's household remaining in King's Landing. 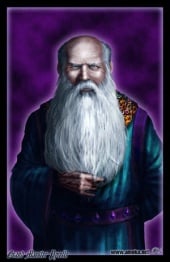 Ned meets with Grand Maester Pycelle in the stifling heat that has covered the city. Pycelle talks about how the smallfolk claim that the last year of summer is the hottest. The Grand Maester goes on to say that he does not believe this, noting that King Maekar's summer was even hotter and broke in the seventh year, leading to a short autumn and a terrible long winter. Then Pycelle digresses about being a young man, forging his maester's chain during the reign of Maekar.

Finally, Pycelle remembers that Ned asked about Jon Arryn and explains that Lord Arryn was melancholy but healthy, then suddenly became ill. He had asked Pycelle about a book, and Pycelle remembers noting that something was troubling him. The next day, Lord Arryn was twisted over in pain, unable to get out of bed. Ned mentions that he has heard that Pycelle sent away Lord Arryn's maester. Pycelle states that this was because he felt Maester Colemon did not understand the older body and was endangering Lord Arryn's life with purging potions.

Ned asks if Lord Arryn had any final words. Pycelle responds that Jon Arryn called out the name “Robert” several times, but does not know if he was talking about the king or his son. His last words were whispered to Lysa Arryn and King Robert: "The seed is strong."

Next, Ned asks if there was anything unnatural about the death, and follows up by asking if Pycelle had seen anything like this illness before. Pycelle states that he has seen more of illness than he would like to remember and that every illness is different and yet alike. Eventually, Pycelle says that Jon Arryn's death was no stranger than any other. When Ned mentions that Lysa thinks otherwise, Pycelle says that grief can derange minds--and Lysa’s mind was not the best before, seeing enemies in every corner.

When Ned suggests that Jon Arryn could have been poisoned, the Grand Maester rebuffs him, asking who would do such a thing. Ned replies that he has heard poison is a woman's weapon. Pycelle replies that poison is the preferred weapon of women, cravens, and eunuchs. He continues by telling Ned that Varys was born a slave in Lys, and that Ned should not trust him. Ned scarcely needs reminding, as he already has a bad feeling about Varys.

Ned excuses himself but the Grand Maester halts him to offer any other service Ned may require. Ned uses the opportunity to ask for the book Jon Arryn asked for. Pycelle says it is a ponderous tome of lineages that Ned would find boring. Ned insists he would like to see the book in any case, and Pycelle promises to send it to him once he finds it. On the way out, Ned also learns that Queen Cersei was not in King's Landing when Jon Arryn died. Pycelle's parting words are “I am here to serve,” leading Ned to think, “Yes, but whom.”

On his return to the Tower of the Hand, Ned finds Arya on the steps, standing on one foot. When Ned asks what she is doing she tells him that Syrio Forel says that a water dancer can stand on one toe for hours. Ned expresses his concern about her falling down the steps but Arya states that a water dancer never falls. Then Arya asks if Bran will come to live with them now, and Ned responds that first he must grow stronger. Speaking of Bran leads Ned to recall taking the girls to the castle godswood to offer their thanks when the news of Bran’s recovery arrived. The girls had gone to sleep and dreamed of Bran while Ned stood vigil all night. 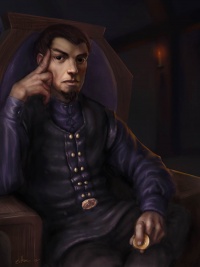 While balancing on her leg, Arya asks about Bran's plans to be a knight of the Kingsguard. Ned admits that Bran will not become a knight, but he may become a lord, a councilor, an architect, an explorer, or even the High Septon, even while privately noting that Bran will never lie with a woman or father a son. When Arya asks if she can do any of these things, Ned says that she will marry a king and her sons will do these things. Arya replies that that is Sansa, not her.

Later, Ned meets with Petyr Baelish in his solar. Littlefinger, who is watching the Kingsguard practicing in the yard below, starts with small talk about who might win the tourney. This does not interest Ned at all, so he asks Littlefinger to get to the point. Ned cannot find it in himself to trust Littlefinger. Littlefinger tells him that four of Jon Arryn's household are still in the city, which surprises Ned, who thought that all had gone back to the Eyrie with Lysa.

Littlefinger reveals the names, which include Jon Arryn's squire, Ser Hugh of the Vale. He also reveals that Ser Hugh was knighted by the king after Lord Arryn died. Ned states that he will send for them, but Littlefinger does not think this is a good idea and asks Ned to come to the window. Littlefinger identifies some of the spies among those outside his window: one is Varys's, the other is the queen's. He tells Ned that there are others, and some even he does not know. He cautions Ned to send a man he trusts completely to question these people rather than doing it himself; even Varys cannot watch every man in Ned's service every hour of the day. As Littlefinger departs, Ned expresses his gratitude and says he was perhaps wrong to distrust him. Littlefinger fingers his beard and replies that distrusting him is the wisest thing Ned has done since he climbed down off his horse.