Ned and King Robert argue over a plot to kill Daenerys Targaryen. When the small council also sides against him, Ned resigns in protest. As Ned prepares to return to Winterfell, Littlefinger arrives with news that he has identified the brothel that Jon Arryn and Stannis Baratheon visited. 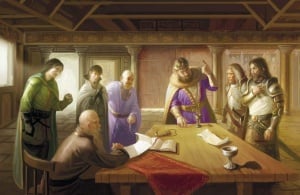 Ned is trying to dissuade King Robert from sending men to kill Daenerys Targaryen, now that Varys has received reports of her pregnancy. Robert wants every Targaryen dead and grows very angry with Ned’s resistance. Ned insists that even if the report is true a lot can happen before the child is old enough to be a threat; the mother might miscarry, or the child might be born female or die in infancy. Ned also proclaims that he will only fear the Dothraki when they teach their horses to run on water.

Renly comments that it was a mistake to allow Viserys and Daenerys to live this long. Ned insists that mercy is never a mistake, pointing out that at the Battle of the Trident Ser Barristan Selmy slew a dozen friends of both Ned and Robert, yet Robert absolved him and appointed him Lord Commander of the Kingsguard. Robert insists that it is not the same; Ser Barristan was a knight of the Kingsguard. Ned counters that Daenerys is a 14-year-old girl and asks why they overthrew House Targaryen if not to end the murder of children. Robert growls that it was to put an end to Targaryens.

When Ned questions how a man who never feared Rhaegar Targaryen can tremble at the shadow of an unborn child, King Robert bellows that he has heard enough and asks for a vote. The other councilors all side with the king except for Ser Barristan who states that there is no honor in killing an enemy in his mother’s womb.

With the decision made, Robert turns to the topic of how best to carry out the assassination. Renly suggests that Ser Jorah Mormont, who craves a royal pardon, might be of use. Varys reminds them all that Ser Jorah is unlikely to risk the punishment the Dothraki would inflict on the murderer of a khaleesi. Instead, the eunuch proposes the alternative of poison, such as the Tears of Lys; Khal Drogo need never know it was not a natural death.

The mention of the Tears of Lys seems to awaken Grand Maester Pycelle from his drowsiness and Robert denounces poison as a coward’s weapon. Ned remarks on the hypocrisy of debating an honorable way to assassinate a 14-year-old and declares that Robert should do the killing himself, the honorable way among the First Men. Robert is astounded when he realizes that Ned actually means what he has just said. 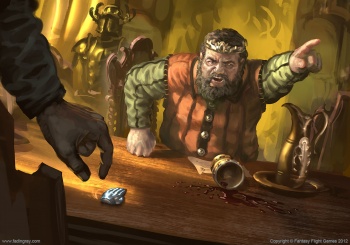 Ned removes his badge of office, declaring that he thought Robert was a better man. © FFG

Ned refuses to participate further, declaring that Robert can do as he likes but that he will have no part of it. Robert declares that, as Hand, Ned will do as commanded or be replaced by a Hand who will. Ned wishes luck to his replacement and removes his badge of office, declaring that he thought Robert was a better man. As Ned marches away, the king calls after him that he will have Ned’s head on a spike if he ever sees him again. Before Ned has even left, the council resumes the discussion and Ned overhears Pycelle telling the others of a society of assassins in Braavos called the Faceless Men. Littlefinger counters that they can hire an army of sellswords for a fraction of the price.

Ned returns to the Tower of the Hand and summons Vayon Poole to discuss arrangements for their return to Winterfell. Ned is disturbed that Robert still hates the long dead Rhaegar Targaryen so much. Then Ned thinks about what will happen when the king discovers that Catelyn has taken Tyrion Lannister captive. The king may not care for the Imp, but it will hurt his pride, and Cersei will whisper in his ear. With these thoughts, Ned decides that it might be safest if he and the girls go ahead, and the rest can follow.

After Poole leaves, Ned reflects that it will be wonderful to be back at Winterfell with his sons, but he remains angry because the kingdom is in a crisis: Robert and his council of cravens and flatterers will beggar the realm, or sell it to the Lannisters. Then there is the murder of Jon Arryn. Ned considers taking a ship back to Winterfell, even though he would prefer the kingsroad, so that he can stop at Dragonstone and maybe learn the truth from Stannis Baratheon.

The more he thinks about it, the more Ned guesses the truth is a secret he may not want to know. He looks again at the assassin’s dagger and wonders if it has some connection to the mystery of Arryn’s death. Could Robert be part of it? He remembers Catelyn telling him that he knew the man but the king is someone different. Ned summons Poole back and tells him to find a fast ship with a good captain, quietly but quickly; if he could find a ship tomorrow, it would be best to be on it.

Tomard announces the arrival of Littlefinger. Ned is tempted to send him away, but thinks better of it. Littlefinger informs Ned that he has managed to convince the council to offer a lordship to any man who kills Daenerys rather than hire the Faceless Men. When Ned criticizes the principle of giving titles to assassins, Littlefinger points out that he actually did Daenerys more good than Ned did; if a Faceless Man were to be sent against the girl she would be as good as buried, whereas this way some idiot will likely botch the job and put the Dothraki on their guard.

Ned is incredulous; Littlefinger supported the proposal but now expects him to believe that he was defending the girl. Littlefinger then calls Ned an enormous fool who rules like a man dancing on rotten ice. Ned insists that he has had his fill of politics. Littlefinger then says that if Ned is still in the city this evening he will take him to the brothel his men have been searching for so ineffectually.