King Robert I Baratheon arrives with his party at Winterfell, where he offers Lord Eddard Stark the position of Hand of the King and proposes a betrothal between Eddard's daughter, Sansa and his own son, Prince Joffrey. 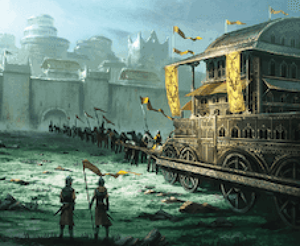 The king's party, three hundred strong, rides into Winterfell. Eddard recognizes Ser Jaime Lannister, Tyrion Lannister, Prince Joffrey Baratheon, and Sandor Clegane, but does not recognize his old friend King Robert until Robert calls out. Eddard is shocked to see that Robert has gained 8 stone (112 pounds) since they last saw each other nine years ago during Greyjoy's Rebellion. Eddard pays obeisance as Queen Cersei and the younger children debark from the wheelhouse. After the formalities of greeting, including the introduction of children from both parties, Robert insists on being taken down to the crypts of Winterfell where the dead of House Stark are buried, so he can pay his respects to Eddard's sister. Queen Cersei objects, but is disregarded by Robert, and quietly led away by her twin brother.

Ned asks Robert about his journey and Robert complains of the distance that has to be traveled in the vast emptiness of the north. Robert then describes the advantages of living in the south, telling Ned he has to see the wonders, the warmth, and the undress of the women.

They descend into the crypt, which is an effort for the out-of-shape Robert. Robert wants to visit the tomb of Ned's sister Lyanna Stark, who was his betrothed. They pass the dead of House Stark with statues in front of the crypts, each lord holding a sword on his lap with a direwolf at his feet. They arrive at the last of the occupied crypts. Here there are three tombs for Ned's father Rickard, his elder brother Brandon, and his sister Lyanna. Robert declares that Ned should have buried Lyanna on a sunny hillside, but Ned explains that she was a Stark of Winterfell and belongs here as was her wish. Ned remembers her dying, with only he and his friend Howland Reed nearby, while Robert recalls taking his vengeance on Rhaegar Targaryen for what he did to Lyanna, regretting that he only got to kill him once. Ned suggests that they should return to the surface where Robert's wife will be waiting. Robert replies that the Others can take his wife, but they start back all the same.

As they return, Ned asks about Jon Arryn and Robert declares that he has never seen a man die so quickly: from healthy to dead within a fortnight. Ned asks how Jon's widow Lysa is bearing her grief, explaining that Catelyn fears for her sister. Robert confides that he thinks Jon’s death has driven Lysa mad and that she has taken her son, Robert Arryn, back to the Eyrie. Robert had hoped to foster the sickly boy with Tywin Lannister, but Lysa refused to hear of it and left in the dead of night; Cersei was furious. Ned, who does not trust Tywin, is relieved. Ned asks to foster Robert Arryn himself, but Tywin has already agreed and Ned taking him as a ward would be an insult to Tywin. 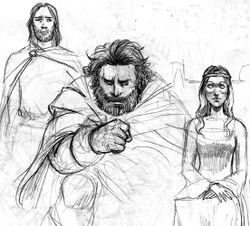 Ned comments that Robert should visit the Wall, but Robert responds that he has more important concerns such as replacing Lord Arryn, who held several important positions such as Warden of the East. Ned reminds Robert that that title traditionally goes with the domain of House Arryn but Robert declares that he will not appoint six-year-old Robert Arryn as Warden of the East. Ned reminds Robert that during times of peace the title is only an honor. The king is not pleased--the son is not the father, though maybe when the boy is grown the title will be given back. Robert mentions that he also needs a new Hand of the King and offers the position to Ned so they can work together again. Then Robert tells Ned how the responsibilities bore him and complains that he is surrounded by flatterers and fools. He insists that he wants Ned to come south to King's Landing to be Hand of the King, the second most important man in the kingdom.

Ned does not want the position and tries to declare himself unworthy of the honor. Robert only jokes that he is not trying to honor Ned but to get him to run the kingdom for him, relating the lowborn saying that "the king eats and the Hand takes the shit." Robert asks for at least a smile, but Ned replies that it is said to be so cold in the North that a man's laughter freezes in his throat and chokes him to death.

King Robert also offers to marry his son, Prince Joffrey, to Ned's eleven-year-old daughter Sansa Stark to join the Houses of Stark and Baratheon as he and Lyanna were supposed to. Ned hesitates to make this decision, wishing to speak to his wife, but Robert asks him not to take too long. Ned is filled with a sense of foreboding, knowing that Winterfell is where he belongs, and that winter is coming.