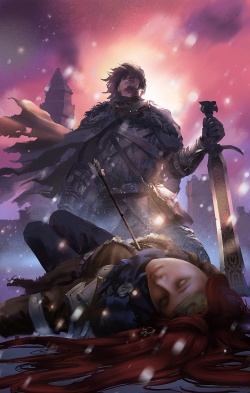 Donal Noye and Jon have done the best they could to fortify Castle Black from the impending attack of Styr and his raiders. The castles along the Wall were designed defenseless, as the Night's Watch was not meant to be able to repel a force from the South. Castle Black was meant specifically to be protected from wildlings by the Wall itself. When Styr, the Magnar of the Thenns, and his men attack, many of the defenders die, while Jon and Satin fire arrows from one of the roofs. At one point, Jon has Ygritte in his sights but he cannot loose an arrow at her.

Finally Donal Noye fires the powder kegs he had placed along the lower staircase of the Wall. The Magnar and the rest of his men perish as the staircase and a section of ice from the Wall crushes them. Amidst the destruction, Jon finds Ygritte, shot through the chest with a crossbow by someone else, and the woman he loved dies in his arms.