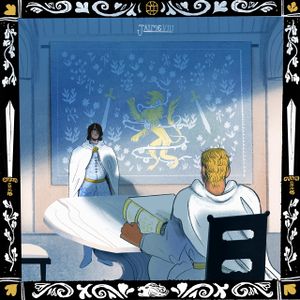 Jaime is looking through the White Book, the history of the Kingsguard, updated throughout the ages by the Lord Commander. We learn much about Barristan Selmy, who gained the title ‘the Bold’ when he was just ten, riding as a mystery knight in a tourney at Blackhaven, where he was unmasked by the Prince of Dragonflies. Barristan was knighted at sixteen by King Aegon V, and named to the Kingsguard in his 23rd year by Gerold Hightower.

The deeds and legends of Barristan the Bold are not lost on Jaime. He recalls the awesome fight between the Sword of the Morning and the Smiling Knight of the Kingswood Brotherhood, and thinks of his own childhood wishes: That boy had wanted to be Arthur Dayne, but someplace along the way he had become the Smiling Knight instead.

Jaime then receives the five Kingsguard currently under his command, and tests each of them. He mocks Boros Blount for his cowardice and inability to protect Prince Tommen, and tells him that from here on in, Blount will taste all the King’s food. Blount storms from the room, and Jaime goes after Osmund Kettleblack. Disgusted that an upjumped sellsword with no reputation has been named to the Kingsguard, Jaime at least concedes that the man probably knows how to fight.

Having heard the details of the Kingsguard's willingness to beat Sansa Stark on Joffrey's orders, Jaime commands Meryn Trant to temper his obedience to the king while the king remains a boy, and to obey the Queen Regent, the Hand, and the Lord Commander of the Kingsguard instead. He gets Balon Swann to swear he will remain true to the Crown, even though his father and brother’s allegiance are in question.

Lastly, he questions Loras Tyrell, and finds the Knight of Flowers as cocky as he himself was in his youth. Jaime asks Loras about the supposed ghost of Renly Baratheon that fought at the Battle of the Blackwater at the van of his father's forces, obtaining an admission that it was Garlan Tyrell inside the armor. Then he confronts Loras about Brienne, and commands him to judge the woman fairly, on his honour as a knight.

Considering Jaime’s words about Renly’s death, Ser Loras nearly breaks down, stating, "When I saw him all bloody, with her fled ... if she’s innocent, then Robar and Emmon…" Jaime absolves him of killing the two Rainbow Guard in a rage, and then sits alone in the room, contemplating the other debts he still has to pay.