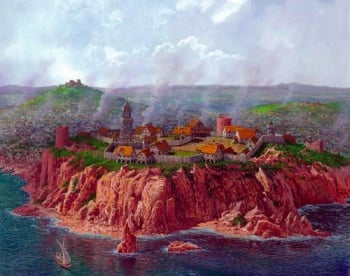 The Aegonfort, as depicted by Ted Nasmith in The World of Ice & Fire

Aegon's Landing refers to the arrival of Aegon the Conqueror in Westeros at the start of the Conquest in 2 BC.[1]

Aegon Targaryen, Lord of Dragonstone, and his sisters, Visenya and Rhaenys, sailed from Dragonstone with a host said to have numbered between some hundreds and three thousand men. They arrived at the undefended mouth of the Blackwater Rush on the mainland of Westeros with the intention of conquering the continent.[1] Aegon landed on the same day that Harren Hoare, King of the Isles and the Rivers, took residence in the finally completed Harrenhal.[2] When the High Septon learned of Aegon's landing in Westeros, he locked himself in the Starry Sept for a week to pray.[3]

Aegon ordered the construction of the Aegonfort on the highest of the hills at the Blackwater's mouth, and Rhaenys and Visenya were sent to Rosby and Stokeworth, respectively. The would-be king was then victorious in Aegon's first test.[1] After securing the mouth of the Blackwater, Aegon was crowned at the Aegonfort as "Aegon, First of His Name, King of All Westeros, and Shield of His People". The new king then departed the Aegonfort to confront Harren the Black in the riverlands.[1]

Aegon's Conquest, the first of the Wars of Conquest, lasted for more than two years and ended with Aegon I anointed king by the High Septon in Oldtown.[3] Six of the Seven Kingdoms were consolidated under his rule, with only Dorne remaining independent.[1]

Varys: We also have a sudden plague of holy men. The comet has brought forth all manner of queer priests, preachers, and prophets, it would seem. They beg in the winesinks and pot-shops and foretell doom and destruction to anyone who stops to listen.
Tyrion: We are close on the three hundredth year since Aegon's Landing, I suppose it is only to be expected. Let them rant.[4]