Aegon Targaryen (son of Aenys I)

From A Wiki of Ice and Fire
(Redirected from Aegon the Uncrowned)
Jump to: navigation, search
For others with the same name, see Aegon Targaryen.

Prince Aegon Targaryen was a member of House Targaryen and was the second child, and eldest son and heir, of King Aenys I Targaryen and Queen Alyssa Velaryon. After his father's death, he became a dragonrider and rode his late father's dragon, Quicksilver. He became known to history as Aegon the Uncrowned after his uncle usurped the Throne.[1]

Aegon at fifteen was lean and handsome, he caught the eye of many a maiden and Aegon was not indifferent to their charms. Some said he was the very image of his grandsire at the same age. He was skilled with a lance, sword and axe.[1]

Aegon was born in 26 AC to Prince Aenys Targaryen and Lady Alyssa Velaryon. In 37 AC, he was present on Dragonstone with his younger brother, Prince Viserys, where their grandfather, King Aegon I Targaryen, was telling them tales of his conquests. Aegon the Conqueror suffered a stroke, however, and later died in peace.[1][2]

In 41 AC, during the reign of his father Aenys I, Aegon still had not claimed a dragon of his own, Although his sister Rhaena did take him flying with her on Dreamfyre.[1] His father decided it was time his heir was wed and that he would marry his older sister, Rhaena. At the feast of his wedding, King Aenys officially named him the Prince of Dragonstone, upsetting Dowager Queen Visenya Targaryen, who left the feast in protest.[1]

The incestuous marriage of Aegon and Rhaena enraged the Faith of the Seven . After the wedding, Aegon and his bride were sent on a royal progress by their sire. Rhaena wiser than her father asked his leave to bring her dragon Dreamfyre with them, but the request was denied. As Aegon had not yet claimed a dragon, the king feared that the lords and commons might think him unmanly if they saw his wife on dragonback and him on a palfrey. The moment they set off, their escort were jeered by crowds and even pelted with dirt. Aegon had to be restrained by knights in the escort from trying to chastise the culprits as their party was outnumbered. The High Septon later declared Aenys a tyrant who had no right to rule which launched the uprising of the Faith of the Seven against the Targaryens.[3][1]

Fight for the Throne 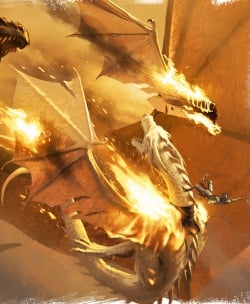 Aegon and Quicksilver as depicted by Michael Komarck in The World of Ice & Fire.

In 42 AC Aegon and Rhaena were trapped at Crakehall by members of the Faith. At the same time, Aegon's father, King Aenys, died on Dragonstone. Dowager Queen Visenya brought Prince Maegor back from his exile in Essos, and he declared himself king.[4][1] When the Poor Fellows who had besieged Crakehall departed to march on King's Landing, Aegon and Rhaena fled to Casterly Rock, where Lord Lyman Lannister protected them by extending guest right. There, Aegon's twin daughters Aerea and Rhaella were born the following year.[1][5][4]

After Maegor's coronation, Aegon found himself abandoned by many who he once considered his loyal friends. Throughout the realm, it was whispered that Aegon was weak like his father was, pointing out Aegon had never taken a dragon of his own, whereas Maegor had claimed Balerion the Black Dread. In 43 AC, while Maegor was in Oldtown, Rhaena and Aegon took note of his long absence from the capital, and after a long journey managed to successfully infiltrate King's Landing. With several companions aiding them, Aegon and Rhaena entered one of the city gates in a mule wagon, concealed in the back under sacks of corn. Once in the city, they were given further aid by several collaborators who had grown weary of Maegor's persecutions. However, Aegon and Rhaena did not seize the Iron Throne, as they lacked the strength to hold it; they had come for dragons. Rhaena was reunited with Dreamfyre, and Aegon finally claimed a dragon, his late father's mount Quicksilver. The pair left the city on dragonback, so they could raise an army.[1]

In 42 AC, Aegon was declared king by his mother, Alyssa, but was becoming known as "Aegon the Uncrowned" throughout the realm.[1] In 43 AC, Queen Tyanna of the Tower warned Maegor that Alyssa was secretly communicating with the Starks, Arryns, Baratheons, and Lannisters. The great lords, however, would only publicly support Aegon after a victory. Thus, Aegon denounced his uncle as a tyrant and usurper[1][4] and marched through the riverlands leading an army of fifteen thousand from atop his dragon Quicksilver.[1] Royalist armies marched toward him from three directions. Aegon's army was larger than any one, but the inexperienced young commander did not want to attack and defeat each one separately. During the Battle Beneath the Gods Eye, Maegor attacked while riding Balerion. The much larger and stronger dragon killed Aegon and Quicksilver.[1][4]