Areo Hotah is the captain of the household guard at Sunspear for the Prince of Dorne, Doran Martell. He is originally from the Free City of Norvos, where he was trained by the bearded priests.[2] In the television adaptation Game of Thrones he is portrayed by DeObia Oparei.

Areo is broad-shouldered with white hair. He bears a longaxe that has a shaft six feet long.[2]

In Norvos, Areo wore a heavy horsehair cape and a studded leather tunic and an iron halfhelm with a crest of sharpened spikes. When he arrived in Dorne, he quickly realized he had to change his clothing to acclimatize to the Dornish sun. Nowadays, he wears a shirt of copper scales with a billowing cloak of dun-and-yellow sandsilk to keep the sun off the copper. He still wears his norvoshi halfhelm but wrapped it in orange silk to avoid the sun beating down on the metal which caused him headaches.[2]

Areo was born in Norvos[3] as the youngest of six children. He was sold to the bearded priests at a young age. When he was sixteen years old, he completed his training. He was wedded to his axe and branded on his chest to signify the event.[2] He became a guardsman to the family of Lady Mellario, and was present the day she first met her future husband, Prince Doran Martell.[3][4] He escorted Mellario when she traveled with Prince Doran to Dorne, having learned Westerosi speech. Upon arrival in Dorne, Areo found it a strange place; the Dornish women were lewd, Dornish wine was sour, and Dornish food was full of queer hot spices. He also thought the Dornish sun was hotter than the pale, wan sun of Norvos.[5] Areo entered the service of House Martell, and Mellario married Doran.[2]

Areo watched all of Doran and Mellario's children grow up, and developed a father-like love for Princess Arianne Martell, whom he refers to as "little princess."[2][5] Despite this affection, however, he is utterly loyal to Prince Doran.[2][6] Areo eventually became the captain of Prince Doran's guard, and remained in Dorne to serve the Martell's even after Mellario returned to Norvos. Even after all his years in Dorne, Areo still reminds himself of the vows he took when he was sixteen, "Serve. Obey. Protect."[2]

When Doran Martell moved from Sunspear to the Water Gardens due to his deteriorating health, Areo accompanied him. On occasion, Areo is sent to Sunspear by Doran.[2] 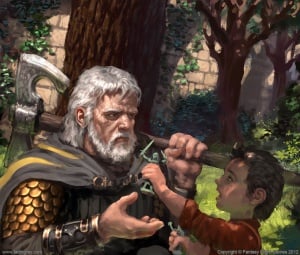 Areo is at the Water Gardens with Prince Doran Martell. Following the death of Prince Oberyn Martell, Areo accompanies Doran when the latter returns to Sunspear. He is ordered by Doran to arrest Oberyn's bastard daughters, the Sand Snakes.[2]

Areo is sent by Doran to put an end to Arianne Martell's plot to steal Princess Myrcella Baratheon away with the intention of crowning her Queen of the Seven Kingdoms. During the confrontation, Ser Arys Oakheart, Myrcella's sworn shield, charges Areo and his guards and is slain by Areo.[6] He then escorts Arianne back to Sunspear to await an audience with Doran.[4] After she has spent several weeks in confinement, it is Areo who retrieves Arianne and brings her to Doran.[4] 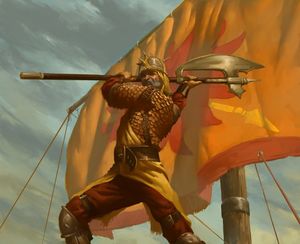 Areo is present at the feast where Ser Balon Swann of the Kingsguard presents Prince Doran Martell with the skull of Ser Gregor Clegane. Areo notes that Swann looks to be a more formidable warrior than Ser Arys had been, and wonders if it will come to a fight between them as well.[5] Areo is present when Prince Doran discusses his plans in a private solar with Arianne Martell and Obara, Nymeria and Tyene Sand.[5]

Areo joins Obara Sand and Ser Balon Swann on their mission to hunt and kill the rogue knight Darkstar.[5][7]

It is for my prince to command, for Hotah to obey.[4]