From A Wiki of Ice and Fire
(Redirected from Arryk (Guard))
Jump to: navigation, search
For others with the same name, see Arryk.

Arryk is one of the two personal guards of Olenna Tyrell, the dowager Lady of Highgarden. He is the twin of Erryk, her other guard. Lady Olenna cannot tell them apart, so she calls them Left and Right.[1]

Arryk is seven feet tall, well muscled, with broad shoulders and a narrow waist. He has a strong jaw, blue eyes and a thick red mustache. Arryk wears a gilded halfhelm and a green cloak edged in gold satin, with the golden rose of Highgarden sewn on his chest. He is practically indistinguishable from his twin, Erryk.[1]

It is likely that Arryk is named after Ser Arryk Cargyll, the legendary Kingsguard and twin of Ser Erryk Cargyll. 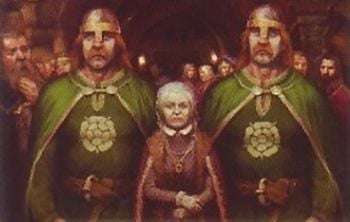 Arryk and his brother escort Lady Olenna to King's Landing for the wedding of her granddaughter, Margaery Tyrell, to King Joffrey I Baratheon.[1]

During Tywin Lannister's wake, Queen Cersei Lannister sees Arryk and his brother by Lady Olenna's sides.[2] The twins also accompany Lady Olenna at the wedding of Margaery and King Tommen I Baratheon.[3] The next day, Lady Olenna and half of the Tyrell army leave the capital to return to Highgarden, and her guards presumably leave with her.[3]