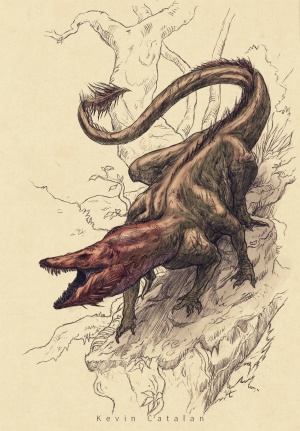 A basilisk, depicted with six legs, by Kevin Catalan ©

Basilisks are a kind of reptile, hideous[1] and fierce.[2] They are said to infest the jungles of Yi Ti.[3] In Sothoryos, basilisks were once numerous in the Basilisk Isles, lending them their name.[2] Basilisks are still found in great numbers on Basilisk Point, some large, some small, and some twice the size of lions.[4]

In some places, basilisks are used to fight other animals, such as dogs, with wagers made on the outcome. A basilisk is able to tear a large dog to pieces.[5]

Basilisks are venomous, and are the source of basilisk venom.[6] The Faceless Men use a paste spiced with basilisk blood, which gives meat a savory scent, but induces a violent madness in any creature with warm blood, whether man or beast. Reportedly, a mouse will attack a lion after a taste of basilisk blood.[7]

When Daenerys Targaryen is visiting the docks at the port of Qarth, she dismounts from her silver beside a gaming pit where a basilisk is tearing a big red dog to pieces amidst a shouting ring of sailors.[5]

Davos Seaworth sees basilisks among the gargoyles that adorn the fortress of Dragonstone.[8]

Arya Stark learns of the properties of basilisk blood paste from the Waif of the Faceless Men, and suspects it may be how Jaqen H'ghar caused Weese's spotted dog to go mad and kill him.[7]

Cersei Lannister dreams of her visit to the tent of Maggy the Frog, which was lit by an iron brazier shaped like a basilisk's head.[9]

In Meereen, the animal-headed brass masks of the Brazen Beasts include the heads of basilisks.[1][10]

Real-world depiction of a basilisk