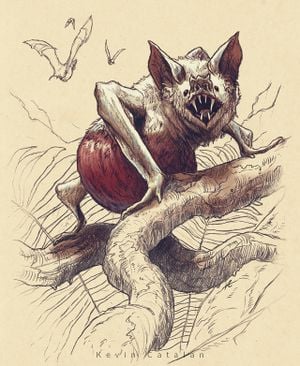 A bat is a flying noctural mammal similar to a real life bat.

Bats can be found in caverns[1][2] and abandonned towers of the known world.[3] A species of pale white vampire bat drinker of blood and capable of killing a man in a few minutes lives in the caverns of Green Hell in Sothoryos.[2] Bats of gigantic size also live in caves beyond the Wall, such as in the cave of the three-eyed crow.[4]

The sigil of House Lothston of Harrenhal depicted a black bat. More than half a century after the Lothston's downfall, their arms are still considerate to be of ill repute. The Lothston's successor, House Whent, also depicts bats on their sigil.[5][6]

In Westeros, the first hour of the night after the sun is set is called the hour of the bat.[7]

Ser Raymond Rychard depicted a red bat on his heraldry.[8]

Ser Oswell Whent of the Kingsguard wore a black bat spreading its wings on his white helm.[9]

A deity looking like a pregnant woman with swollen breasts and a bat's head is whorshipped in Essos.[10]

Harpies have wings of a bat or a dragon instead of arms.[11]

Notable events that occurred during the hour of the bat include Septon Barth announcing the death of Princess Aerea Targaryen in 56 AC,[7] and King Viserys I Targaryen being found dead by a servant in 129 AC. King Viserys was fond of drinking hippocras at this hour.[12]

Danelle Lothston, Lady of Harrenhal, was rumored to practice the black arts. One story claims she sent giant bats out of Harrenhal on moonless night to take the bad children back to her.[6]

Grenn mocks Pyp comparing his large ears to those of bats.[13] According to Mirri Maz Duur, Daenerys Targaryen's stillborn son, Rhaego, is born with leather wings reminiscent of a bat.[14]

After the purple wedding, a rumor spreads about the missing Sansa Stark claiming she used magic to transform herself into a wolf with bat wings in order to escape King's Landing.[15]

When meeting with Ser Barristan Selmy in secret, Skahaz mo Kandaq wears a blood bat mask of the Brazen Beasts.[16]