From A Wiki of Ice and Fire
Jump to: navigation, search
For other uses, see Benjen Stark (disambiguation).

Benjen Stark, also known as Ben Stark,[7] is the First Ranger of the Night's Watch and the younger brother of Lord Eddard Stark of Winterfell. In the television adaptation Game of Thrones Benjen is portrayed by Joseph Mawle and in a Season 6 flashback by Matteo Elezi. 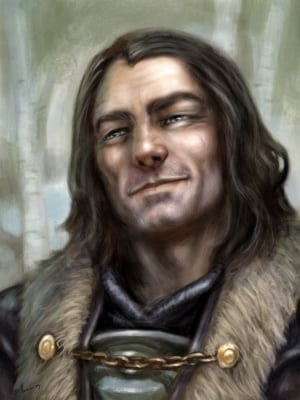 The gaunt Benjen has sharp features and blue-grey eyes, in which a hint of laughter is often present. The thin ranger has long legs.[1]

Benjen dresses in black, as befits a man from the Night's Watch. On formal occasions he wears rich velvet, high leather boots, a silver buckle on his wide belt, and a heavy silver chain.[1]

Benjen is observant[1] and genial,[2] although he shares his brother Eddard's dislike for House Lannister.[8] He enjoys summerwine.[1] The First Ranger is a likely successor to Jeor Mormont, Lord Commander of the Night's Watch.[6]

Benjen was the youngest child of Lord Rickard Stark and Lady Lyarra Stark.[9][10] He attended the tourney at Harrenhal with his siblings, Brandon, Eddard, and Lyanna, in 281 AC. At the tournament Lyanna rescued their father's vassal, Howland Reed, from an attack by three squires. Benjen offered Howland a horse and some armor so he could challenge his attackers. During the feast held to celebrate the start of the tournament, he teased Lyanna when she cried for a sad and beautiful song by Prince Rhaegar Targaryen, a noted musician. Lyanna poured wine over his head for teasing her.[3] When a black brother from the Night's Watch spoke up during the feast, attempting to convince the gathered people to join the black brothers,[3] Benjen took the plea to heart.[6]

The first time Benjen got well and truly drunk, he was younger than fourteen.[1] 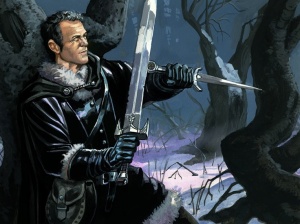 Benjen was the Stark in Winterfell during Robert's Rebellion. Although House Stark had been reduced to Benjen, Eddard, Eddard's infant son Robb, and Eddard's infant bastard son Jon Snow due to the events of the war, Benjen joined the Night's Watch within a few months of Eddard's return north. His reasons for doing so are unknown.[11] Benjen took his vows in front of a heart tree located half a league from Castle Black, within the haunted forest north of the Wall.[12]

Benjen's skills served him well as a ranger,[13] and he quickly rose to the position of First Ranger.[2][6] Mance Rayder came to consider Benjen the bane of the free folk.[14]

Benjen visited Winterfell on several occasions over the years.[15][16] During one visit, Bran Stark asked his uncle about the mysterious Nightfort.[16] Benjen and Eddard had discussed repopulating the Gift by raising new lords, so they could function as a shield against the wildlings. Benjen was convinced that Jeor Mormont, Lord Commander of the Night's Watch, could be convinced to part with the land, on the condition that taxes would be paid to Castle Black instead of Winterfell.[17][18] Benjen also writes his brother about the military strength of the Night's Watch.[19] 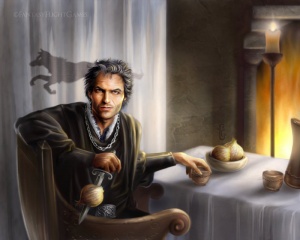 When King Robert I Baratheon rides for the north, Lord Eddard Stark sends word to Benjen on the Wall.[19] During the feast held to welcome Robert to Winterfell, Bran Stark impresses his uncle by reciting the names of the Night's Watch castles along the Wall.[15] Also during the feast, Benjen speaks with Eddard's bastard son, Jon Snow. The youth rashly asks to be allowed to join the Watch, which results in an argument after Benjen states Jon is rather young. Jon angrily refuses Benjen's suggestion that he father some bastard sons of himself before committing to a life at the Wall.[1] Nonetheless, Benjen approaches Maester Luwin about Jon, informing the maester of Jon's question. This leads to Luwin informing Eddard, and eventually Eddard approves of Jon joining the Watch.[20] Benjen is part of Robert's party when the king hunts for boar near Winterfell.[21]

Tyrion Lannister accompanies Benjen and Jon when they travel north to the Wall.[8] Once back at Castle Black, Benjen is busy with his duties as First Ranger and does not have much time for Jon. He reminds his nephew that the men of the Night's Watch leave their families and loyalties behind when they join the brotherhood.[2]

Jeor Mormont, Lord Commander of the Night's Watch, sends Benjen with six rangers[2] to find Ser Waymar Royce, who has not returned from a ranging beyond the Wall.[2][22][23] Benjen thinks they might have to search as far as the Shadow Tower.[2]

When there is no word from Benjen, Ser Jaremy Rykker leads two sweeps in search of him, while Qhorin Halfhand leads another search party going north from the Shadow Tower. Nothing is found except a few blazes in trees that Benjen used to mark his way. The marks stop in the stony highlands to the northwest and all trace of Benjen vanishes.[24] Jaremy takes over command of the rangers in Benjen's absence.[12]

The bodies of the rangers Othor and Jafer Flowers, who had accompanied Benjen on his ranging, are later found in a weirwood grove near the Wall. There is no trace of Benjen or any of the others, however.[7] That night, the two corpses rise as wights at Castle Black and attempt to kill Lord Commander Mormont.[7]

Dywen and Hake unsuccessfully search for Ben.[25] Jeor plans to find Benjen, either dead or alive, and makes it one of the goals of his great ranging.[26]

Jeor rejects Thoren Smallwood's insistence that he is now First Ranger with Benjen missing.[27] When arriving at Craster's Keep, the Lord Commander asks Craster whether he had seen Benjen recently, as Benjen was supposed to have passed the keep during his ranging the previous year. Craster claims not to have seen Benjen in three years.[23]

Jeor believes that Benjen cannot fail to notice the trail two hundred men from the Night's Watch and their horses leave behind during their great ranging, and is convinced that, if Benjen is still alive, he will be able to find his brothers at the Fist of the First Men.[28]

Mance Rayder, the King-Beyond-the-Wall, tells Jon that one of his reasons for infiltrating King Robert's feast at Winterfell was to evaluate Benjen, the First Ranger.[14]

Ser Alliser Thorne accuses Jon of being a turncloak and ponders if the missing Benjen is conspiring with Mance.[29]

Bran Stark witnesses a vision from the past in which he sees a boy and a girl playing with wooden branches in the godswood of Winterfell.[32] Some readers believe this to have been Benjen and his older sister, Lyanna, as Bran describes the girl as being the eldest of the two, and states that she looks like his sister Arya,[33] who is said to look like Lyanna had.[34] Additionally, the girl refers to Old Nan,[32] placing the event Bran witnesses as having taken place in more recent generations.

Benjen: Until you have known a woman, you cannot understand what you would be giving up.


Jon: I don't care about that!


Benjen: You might, if you knew what it meant. If you knew what the oath would cost you, you might be less eager to pay the price, son.[1]
—Benjen and Jon Snow

The Night's Watch is a sworn brotherhood. We have no families. None of us will ever father sons. Our wife is duty. Our mistress is honor.[1] Joseph Mawle as Benjen in Game of Thrones

Benjen Stark was a Sworn Brother. Jon would be a son to him, the child he would never have.[20]

There's not a man on the Wall knows the haunted forest better than Benjen Stark. He'll find his way back.[22]

—unnamed brother of the Night's Watch to Yoren

His blood ran black. Made him my brother as much as yours.[35]

I've not seen Benjen Stark for three years. And if truth be told, I never once missed him.[23]

Benjen Stark on the Game of Thrones wiki.