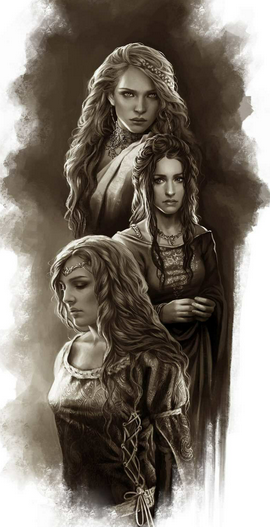 The Black Brides, as depicted by Magali Villeneuve in The World of Ice & Fire.

The Black Brides were three wives of King Maegor I Targaryen, who wed them in a single ceremony held in 47 AC,[1] officiated by the High Septon.[2] Maegor chose them because the three women were of proven fertility. All had been widows of men who had died in Maegor's wars, or at his command.[1]

The women's children were brought as hostages to the wedding ceremony to enforce their compliance. Many strange stories were told of the wedding night, but it is difficult to know the truth from the legends.[2][3]