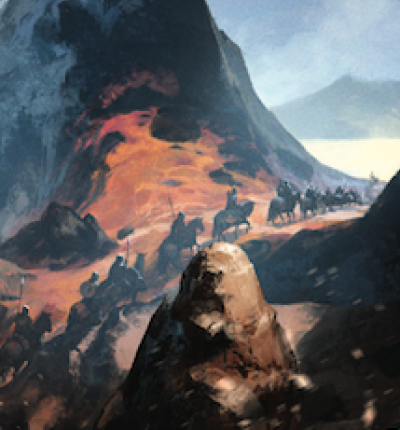 Riders make their way through the Boneway, by Tomasz Jedruszek © Fantasy Flight Games 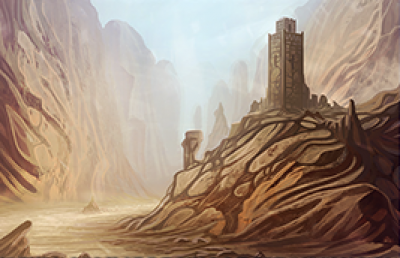 The Boneway is a treacherous pass[1] that runs through the Red Mountains, connecting Dorne and the stormlands. The name is a colloquial name, with the Stone Way being its official name.[2][3]

The Boneway has stony slopes and narrow, twisting passes, and Dornishmen have carved steps into the mountainside at its steepest parts.[4]

The pass's Dornish side is guarded from the castle Yronwood, the seat of House Yronwood, which holds the title Warden of the Stone Way.[2] The path runs north past the River Wyl and ends at Summerhall in the Dornish Marches.[5] The castle of Wyl, the seat of House Wyl of the Boneway,[6] is located along or near the pass.

While the Storm Kings were dealing with the advance of House Hoare into the riverlands, Dornishmen invaded from the Boneway.[8]

When Lord Orys Baratheon marched a thousand knights from the stormlands up the Boneway in the First Dornish War, hidden Dornishmen attacked the invaders with arrows, boulders, and spears.[4][9] While crossing a bridge on the Wyl, the stormlanders were ambushed by archers and had their retreat cut off by a rockslide. Orys and a dozen of his bannermen were taken captive by the Wyl of Wyl, and the rest of his men were slaughtered.[4]

During his conquest of Dorne in 157 AC, King Daeron I Targaryen used dangerous goat tracks[10] to evade the watchtowers of the Boneway.[11] The Dornish killed Lord Lyonel Tyrell at Sandstone and rose in rebellion, so the Young Dragon returned to Dorne in 160 AC. While Lord Alyn Velaryon sailed for the Planky Town and the Greenblood, King Daeron achieved some victories along the Boneway. The Dornish met Daeron to discuss peace, but the king was killed during the parley and Prince Aemon Targaryen was taken captive.[10]

Daeron's brother, Baelor the Blessed, began his reign by walking the Boneway barefoot to make peace between the Iron Throne and Dorne.[12] After meeting the Prince of Dorne in Sunspear, Baelor returned north. He recovered Aemon from the Wyls, but was bitten by vipers while doing so. The septon of a village along the Boneway aided the ailing king, and the Targaryens managed to reach the safety of Blackhaven.[13]

King Aegon IV Targaryen wanted his mechanical dragons to be transported through the Boneway for his invasion of Dorne, but the devices went up in flames in the kingswood.[14] 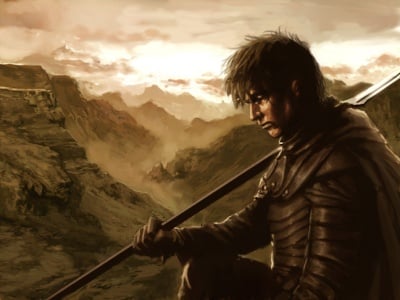 A Dornish soldier at the Boneway, by Michael J. Williams © Fantasy Flight Games

Tyrion Lannister requests that Doran Martell, Prince of Dorne, send his armies to the Boneway to keep the marcher lords in their castles as part of the political betrothal of Princess Myrcella Baratheon and Prince Trystane Martell.[16] Doran promises to move his banners into the high passes once Myrcella arrives safely at Sunspear.[17]

Word eventually reaches Stannis Baratheon that the Dornish have fortified the mountain passes, poised to sweep down onto the Dornish Marches while he besieges Storm's End.[18]

Obara Sand claims that thousands of Dornishmen are traveling to the Boneway to aid Ellaria Sand in bringing home the body of Prince Oberyn Martell.[19]

Lord Anders Yronwood commands a Dornish host in the Boneway.[19]

Ser Balon Swann brings the Mountain's skull to Sunspear, but he is delayed by House Wyl with eight days of hunting and hawking on the Boneway.[20]

Two Dornish hosts have massed in the Boneway and the Prince's Pass. The hosts sit encamped, waiting for Prince Doran to loose them on the enemies of House Martell.[21]