The burning of Harrenhal occurred during Aegon's Conquest.[3] Aegon the Conqueror used his dragon, Balerion the Black Dread, to melt the towers of Harrenhal, which killed King Harren the Black and ended the black line.[1]

House Hoare had ruled the Iron Islands and the riverlands as the Kings of the Isles and the Rivers for three generations. King Harren Hoare, also known as Harren the Black, had devoted most of his reign, nearly forty years, to the construction of Harrenhal, which would be the largest castle in Westeros, on the northern shore of the Gods Eye. Thousands had died while building the castle, and the riverlands had been depleted in terms of materials. On the day the new castle was finally completed, however, Aegon Targaryen landed at the mouth of the Blackwater Rush, to start his Conquest.[1]

Supported by many great ironborn lords and warriors,[2] Black Harren raised his banners. His men fought Aegon's host in the Battle of the Reeds, which was a Targaryen victory, albeit with heavy losses, and the Wailing Willows, in which House Hoare was victorious. However, in the meantime, after years of plundering and beggaring the riverlands, Harren the Black had to face the consequences of those actions. Lord Edmyn Tully of Riverrun, the most powerful of the riverlords following Harren's harsh treatment of House Bracken and House Blackwood, refused to support Harren and instead joined the Targaryens. Following the Tully's example, numerous other riverlords, including the Blackwoods, Mallisters, Vances, Brackens, Pipers, Freys, and Strongs, rebelled against Harren's ironmen and marched to surround Harrenhal. Outnumbered, Harren closed the gates of well-stocked Harrenhal in response.[1][4] 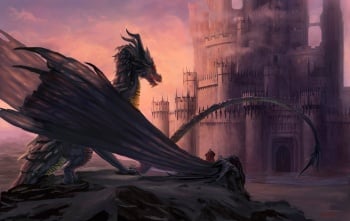 Balerion and Aegon I Targaryen overlooking Harrenhal before their nighttime attack.

Harrenhal's walls were too high and too thick, and well-stocked enough to withstand a siege. During a parley outside the castle, Aegon offered to confirm Harren as Lord of the Iron Islands, provided he would yield. Harren refused, trusting in the strength of his castle, confident that the stone would not burn. Aegon warned him that the line of House Hoare would come to an end that night, at which Harren returned to his castle. To his men, he promised riches and the daughters of the riverlords to anyone who could slay Aegon's dragon, Balerion, in the upcoming battle.[1]

When the sun had gone down, Aegon flew Balerion high above Harrenhal, before plunging down upon Harrenhal, burning the castle beneath him. All that was flammable, both suplies and ironmen, caught fire within the castle, while Harrenhal's stone towers cracked and melted. The rivermen outside observed that the towers glowed and melted like candles.[1] Harren and his sons died in the largest of the towers of Harrenhal, which would later give the tower its name: Kingspyre Tower.[5] With their deaths, House Hoare was extinguished.

Once Harrenhal cooled, the ruined swords of the ironmen were taken to the Aegonfort, where they eventually became part of the Iron Throne.[1] Only a few of Harren's supporters survived the burning or the uprising of the rivermen to make it back to the Iron Islands.[2]

The day following the burning of Harrenhal, Lord Edmyn Tully swore fealthy to Aegon, who accepted and named him Lord Paramount of the Trident,[1] as he had been the first riverlord to support him.[6] Aegon next accepted oaths of fealthy from the other riverlords.[1] Aegon also granted partially-ruined Harrenhal to Quenton Qoherys, who had been his master-at-arms at Dragonstone.[4]

It is said by some that Harrenhal's Wailing Tower is occupied by the ghosts of Harren and his sons.[5]

Harren: What is outside my walls is of no concern to me. Those walls are strong and thick.


Aegon: But not so high as to keep out dragons. Dragons fly.
Harren: I built in stone. Stone does not burn.


Aegon: When the sun sets, your line shall end.[7]
—Harren Hoare and Aegon Targaryen