From A Wiki of Ice and Fire
(Redirected from Casterly)
Jump to: navigation, search

House Casterly of Casterly Rock was a noble house who lived at Casterly Rock in the Dawn Age. They were the richest house of First Men in Westeros and the most powerful family in the westerlands.[2] 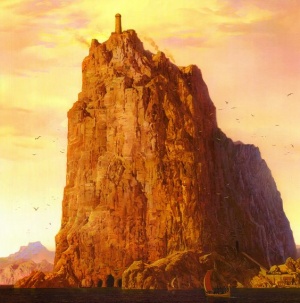 According to legend, the founder of House Casterly was the huntsman Corlos, son of Caster, who lived in a village near where Lannisport eventually sprang up. Corlos slew a lion that had been troubling the village in her den within the Rock. Because Corlos spared her cubs, the gods took favor on him and showed him where to find a huge vein of gold.[2]

Corlos or his kin began to mine the gold within the Rock, living within and fortifying the entrance. The Casterlys delved deeper into the earth, creating halls, galleries, stairways, and tunnels into what became known as Casterly Rock. Although they never ruled as kings, the Casterlys became the most powerful house of the westerlands and the richest lords in all of Westeros.[2]

The Casterlys disappeared from history during the Age of Heroes, having been replaced by House Lannister. Legends claim that the adventurer Lann the Clever tricked Casterly Rock from the Casterlys, although his methods vary in different stories. The most common tale is that Lann coated himself with butter and squeezed into the Rock through a narrow gap. Once inside, he played tricks on the Casterlys to convince them their home was haunted so they would flee. Another story claims Lann filled the Rock with vermin to drive out the Casterlys. Some stories have Lann smuggling lions into the Rock to kill the male Casterlys, and the rogue then sleeping with the Casterly women.[2]

In contrast to the legends, Archmaester Perestan suggests that Lann was a retainer or household guard of the Casterlys who married the daughter of Lord Casterly. Perestan theorizes that if Lord Casterly had no trueborn sons, then after his death the Rock passed to the daughter and Lann.[2]

Ser Jaime Lannister mentions the Casterlys to Hoster Blackwood; Jaime believes the story that the male Casterlys were all killed.[3]

Casterly Rock teems with Lannisters, and nowhere a Casterly to be found. The world changes, ser.[4]

In the songs, Lann was the fellow who winkled the Casterlys out of Casterly Rock with no weapon but his wits, and stole gold from the sun to brighten his curly hair.[5]