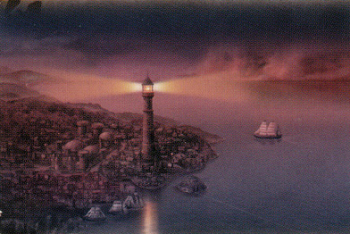 The Citadel in Oldtown by Folko Streese © Fantasy Flight Games

The Citadel is a complex of buildings in Oldtown that serves as the central home to the order of the maesters. The name is also employed to refer to order of maesters as an institution, or the higher placed members.[1] At the Citadel, the residing archmaesters teach and train new students, and convene in the Conclave. The Citadel is funded by taxes from Oldtown and payments from lords for the service of maesters.[2] Maesters rigorously copy books at the Citadel.[3] Leyton Hightower, the Lord of Oldtown, includes Protector of the Citadel among his titles.[4]

See also: Images of the Citadel

The Citadel gates are flanked by a pair of tall green sphinxes, by Andrew Bosley © Fantasy Flight Games

The Citadel lies on the Honeywine, where its towers and domes are connected with arching stone bridges. Houses and stalls sit on the bridges.[4] The gates are flanked by a pair of tall green sphinxes with the bodies of lions, the wings of eagles and the tails of serpents. One has the face of a man, the other a woman.[1]

Just inside the gates of the Citadel lies the Scribe's Hearth. Here, the citizens of Oldtown come to hire scribes, usually acolytes, to write and read letters for them. The scribes wait in open stalls for their custom. Other stalls situated at the Scribe's Hearth include those where books are bought and sold. Others offer maps.[1]

The path divides at a statue of King Daeron I Targaryen atop a tall stone horse; the king's sword is pointed toward Dorne.[1] The Citadel also has a monument of King Jaehaerys I Targaryen; its plinth reads "He bound the land together, and made of seven kingdoms, one."[5] 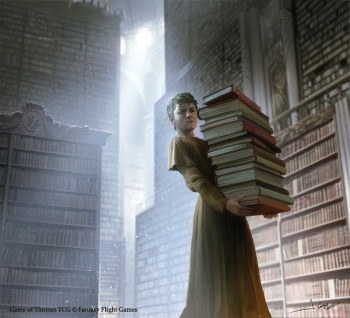 A novice of the Citadel by Joshua Cairós © Fantasy Flight Games

From this dock one can get a boat for a short voyage to the Bloody Isle.[1]

Outside the Seneschal's Court lies where acolytes and novices are punished for minor crimes, such as petty thievery. Inside the doors is a hall with a stone floor and high, arched windows. At the far end of the hall there is a raised dais where a gatekeeper greets all those who wish to make an appointment to see the Seneschal. Behind the dais is a turnpike stair.[1]

The Isle of Ravens is linked to the eastern bank of the Honeywine by a weathered wooden drawbridge. On the island is located the Ravenry, the oldest building of the Citadel. The walls of the Ravenry are covered in moss and vines and within its yard sits a weirwood tree on which the ravens like to perch. The white raven rookery is located in the west tower.[1]

The Library of the Citadel is known to be a great repository of knowledge.[6] The Citadel has a copy of Lives of Four Kings[7] and a partial collection of The Fires of the Freehold.[8] A locked vault beneath the Citadel is said to contain the sole remaining copy of 'Blood and Fire.[8] The Citadel also has an account of Redwyn's journey to Lorn Point and the Frozen Shore, as well as a fragment of Unnatural History.[9] Some of the oldest documents in the Citadel's archives are ancient ballads regaling Kings of Winter.[10] Records at the Citadel describe the ancient rock and salt kings of the Iron Islands.[11]

The Citadel has four glass candles, one green in color and three black. Before an acolyte says his vows, he spends the night prior in the darkness of the Citadel's vault. The acolyte can attempt to light an obsidian candle, but none have succeeded.[4] The Citadel also has a stuffed Little Valyrian on display, but its fur fell out as students patted it for luck over the years.[12]

In the Age of Heroes the Ravenry was supposedly a stronghold of a pirate lord who picked off ships as they came downriver.[1]

The origin of the Citadel is disputed, but House Hightower is generally considered to have played an integral role in its foundation.[13] Most accounts on the Citadel's origins credit its foundation to Prince Peremore the Twisted, the second son of King Uthor of the High Tower. The curious Peremore invited numerous scholars, including wise men, teachers, priests, healers, singers, wizards, alchemists, and sorcerors, to Oldtown. After Peremore's death, his brother, King Urrigon, granted land alongside the Honeywine to "Peremore's pets", who developed the tract into the maesters' Citadel.[14] House Hightower continues to be a strong patron of learning.[13]

There are reports of Aegon and Visenya Targaryen visiting the Citadel in their youth. During Aegon's Conquest, Lord Manfred Hightower submitted to the Conqueror to prevent the destruction of Oldtown by dragonflame.[15]

The Conclave meets to choose the new Grand Maester after Pycelle's removal from the position. Although the deliberations are supposed to be secret, Varys learns from spies at the Citadel that Archmaester Gormon has been selected. The master of whisperers informs the Hand of the King, Lord Tywin Lannister, who quickly reinstates Pycelle.[21]

Maester Aemon sends a raven to the Citadel in a plea for help to defend Castle Black from wildlings.[22]

Half a year ago, Archmaester Walgrave was found weeping in the Library by acolytes after being unable to find his way back to his chambers.[4]

Pate, a novice at the Citadel, is killed by an alchemist after leaving the Quill and Tankard.[4]

Jon Snow, the new Lord Commander of the Night's Watch, sends Samwell Tarly to the Citadel to study and become a maester.[23] Maester Aemon brings a chest of rare books from the vault of Castle Black to gift to the Citadel,[23] but Sam gives them to Quhuru Mo to pay for passage on the Cinnamon Wind at Braavos and the aged Aemon dies en route.[24] After Sam arrives at Oldtown, he is forced by the gatekeeper Lorcas to wait for the Seneschal, Archmaester Theobald. Alleras brings Sam to meet Archmaester Marwyn at the Ravenry. Marwyn the Mage alleges that maesters of the Citadel helped to extinguish dragons, and the archmaester departs the Citadel to find Daenerys Targaryen.[1] 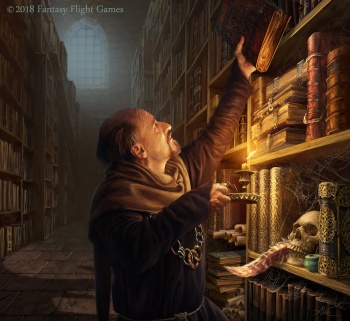 The Citadel is the greatest repository of knowledge in the known world.[5]

—Elysar to Jaehaerys I Targaryen

There are so many books at the Citadel that no man can hope to read them all. You would do well there, Sam. I know you would.[23]

The healers of the Citadel are the best in the Seven Kingdoms.[24]

The Citadel is not what it was. They will take anything these days. Dusky dogs and Dornishmen, pig boys, cripples, cretins, and now a black-clad whale. And here I thought leviathans were grey.[1]

The world the Citadel is building has no place in it for sorcery or prophecy or glass candles, much less for dragons.[1]