Inn at the crossroads

From A Wiki of Ice and Fire
(Redirected from Crossroads)
Jump to: navigation, search

The inn at the crossroads[2][3] or crossroads inn[4] is an inn that lies at the crossroads between the kingsroad running north-south, the river road west through the riverlands to the westerlands, and the high road east to the Vale of Arryn. It is sometimes called the Old Inn and was formerly named the Two Crowns, the Bellringer Inn, the Clanking Dragon, and the River Inn.[4]

The crossroads inn sits to the north of the Trident,[5] near the ruby ford.[6][2] It lies in lands that used to belong to House Darry.[4] Nearby is a marketplace and a village with half a hundred white houses and a small stone sept.[5]

The inn is three stories tall with turrets and chimneys made of white stone.[4] Its south wing is built upon pilings that rise over a bed of weeds. The Trident once flowed under that wing, but the river has since moved.[4] The long and drafty common room has wooden kegs at one end and a fireplace at the other; beer and wine are offered at the inn.[5][7] The building has a kitchen,[5] a porch,[4] and a cramped narrow staircase.[5] The rooms upstairs have featherbeds,[7] and some have hearths as well.[8]

On the north side of the inn is a stable with a thatch roof and a bell tower,[4] with garrets found beneath the tower.[5][7] Past the stables is a forge.[4] The building is surrounded by a low wall of moss-covered broken white stones.[4] 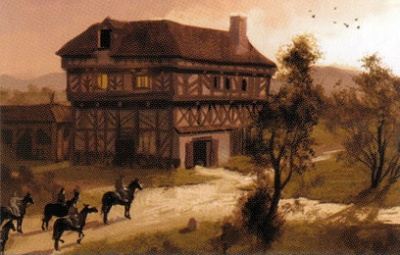 An inn has existed at this spot for hundreds of years. The current inn was raised during the reign of King Jaehaerys I Targaryen, who built the kingsroad. He and Queen Alysanne Targaryen stayed there, and the inn was named the Two Crowns in their honor. After one of the innkeeps built the bell tower, the name was changed to the Bellringer Inn.[4]

The inn eventually passed into the hands of Long Jon Heddle, a knight who had been crippled. Jon, who taken up ironworking in his old age, forged a new sign to hang in the yard, a three-headed black iron dragon. The inn became known as the Clanking Dragon for the noise the sign made in the wind.[4]

During the First Blackfyre Rebellion, Daemon I Blackfyre took a black dragon as his emblem. Lord Darry, then overlord of the inn's lands, was a noted Targaryen supporter. He saw the inn's black dragon sign and became angry; he cut it down, hacked it to pieces, and threw it into the river. Eventually one of the iron dragon's heads washed up on the Quiet Isle, red with rust. The sign was never replaced and people eventually forgot about the dragons.[4]

The inn became known as the River Inn, since the Trident flowed beneath its back door and half its rooms were built out over the water. It was said that the inn's guests could throw a line out their window and catch fish. There was also a ferry landing at the inn, where travelers could cross to Lord Harroway's Town and Whitewalls. However, the river moved between 220–230 AC when Masha Heddle's grandfather was the innkeeper.[4]

Smallfolk now call the establishment the crossroads inn.[4] Catelyn Stark often slept at the inn when traveling with her father, Lord Hoster Tully.[5] Septon Meribald sometimes stops at the inn during his circuit of the riverlands.[4]

While traveling to King's Landing, the royal retinue of King Robert I Baratheon stops at the crossroads inn.[6][9] The inn has accomodations for less than a third of Robert's party of more than four hundred.[6] The king takes Lord Eddard Stark to hunt for wild aurochs.[6] Prince Joffrey Baratheon is wounded by the direwolf Nymeria near the ruby ford south of the inn.[6]

Catelyn Stark and Ser Rodrik Cassel stay at the busy inn while returning to the north from King's Landing. Catelyn finds their garrets beneath the bell tower to be low and dusty. Also visiting the inn are Brackens, Freys, and Ser Willis Wode. Tyrion Lannister arrives with Jyck, Morrec, and Yoren. Catelyn attempts to remain incognito, but Tyrion recognizes her. Believing that Tyrion was to blame for the attack on her son, Catelyn has rivermen and sellswords help her arrest the dwarf.[5] Masha Heddle begs the nobles to take their quarrel elsewhere. Instead of Winterfell, Catelyn brings her captive to the Vale of Arryn.[10]

When war breaks out, Lord Tywin Lannister destroys the nearby village and takes the inn as his quarters while he is encamped at the crossroads. He takes revenge on Masha, hanging her on a gibbet in the yard. Tyrion sees Masha's body when he meets his father at the inn, after leaving the Eyrie with his clansmen.[2] The Lannisters return to the inn after the battle on the Green Fork, and Tywin discusses the Battle of the Camps with his bannermen in the common room. The small Tyrion finds his garret to be cozy.[7]

After Tywin goes to Harrenhal, Lord Roose Bolton recaptures the crossroads from the Lannisters.[11] 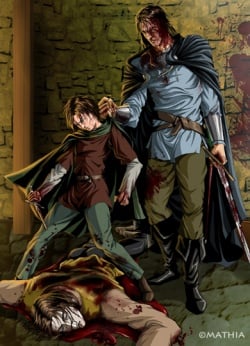 Sandor pulls Arya off the Tickler, by Mathia Arkoniel ©

Visiting the inn for wine and information, Sandor Clegane and Arya Stark happen upon three of Gregor Clegane's men. After a brief conversation, in which Sandor warns the innkeeper that the Mountain's men plan to torture him to find out where he keeps his gold, a fight breaks out. Sandor and Arya kill Polliver, the Tickler, and a pimply squire, but Sandor is badly wounded in the mêlée.[9]

When questioned by Rafford, the innkeep and his whores attribute the deaths of Gregor's men to Sandor, who was accompanied by a "a ragged peasant lad". Raff the Sweetling does not send men after the Hound, however.[8] When Ser Jaime Lannister arrives at Harrenhal, he requests to interview the whores from the crossroads.[8]

Jeyne and Willow Heddle, the nephew's daughters[13] or Masha's nieces,[4] reopen the inn for business and as a refuge for orphan children, including Ben, Pate, Jon Penny, Tansy, Wat, and Will. The Heddles and the inn are connected with the brotherhood without banners, and Gendry works for them as a smith.[4] In the aftermath of the Red Wedding and the raid on Saltpans, some broken men who stay at the inn are hanged with salt in their mouths by the brotherhood, despite believing they had been under the protection of guest right.[4][14]

Brienne of Tarth, Podrick Payne, Meribald, and Ser Hyle Hunt travel to the crossroads inn. Meribald tells his companions the history of the inn and the Heddle family. The group passes hanged men in the vicinity, alleged perpetrators of the raid on Saltpans, which leads Hyle to say the inn should now be called the "Gallows Inn".[4]

Brienne and her companions are greeted at the inn by Willow, Gendry, and the orphans. Several of the children are armed with crossbows, leading Hyle to suggest the inn should be called "Crossbow Inn", and Brienne to think that "Orphan Inn" would be more accurate. Jeyne is away with the brotherhood, but Meribald trades his food for rooms at the inn. Blood has stained the floor in the common room where Sandor killed the Mountain's men.[4]

A fight ensues when outlaws from the Brave Companions arrive and threaten Willow and the children. Brienne defends them and Gendry joins the rainy fight. Rorge and Biter are slain, but Brienne is badly wounded.[4] Jeyne tends to Brienne's wounds after the battle.[14] When Lem returns to the inn from the Green Fork, he has Brienne, Hyle and Podrick given over to Lady Stoneheart.[14]

Chapters that take place at the crossroads inn

The crossroads made for odd companions; dyers with black and purple hands shared a bench with rivermen reeking of fish, an ironsmith thick with muscle squeezed in beside a wizened old septon, hard-bitten sellswords and soft plump merchants swapped news like boon companions.[5]

Podrick: Is the dragon sign still there?
Meribald: No. When the smith's son was an old man, a bastard son of the fourth Aegon rose up in rebellion against his trueborn brother and took for his sigil a black dragon. These lands belonged to Lord Darry then, and his lordship was fiercely loyal to the king. The sight of the black iron dragon made him wroth, so he cut down the post, hacked the sign into pieces, and cast them into the river. One of the dragon's heads washed up on the Quiet Isle many years later, though by that time it was red with rust.[4]

Hyle: I never dreamed that keeping an inn could be so deadly dangerous.
Meribald: It is being common-born that is dangerous, when the great lords play their game of thrones.[4]

They had come to the crossroads, quite literally; the place where the kingsroad, the river road, and the high road all came together.[4]