From A Wiki of Ice and Fire
(Redirected from Crowfood Umber)
Jump to: navigation, search

Mors Umber, known as Mors Crowfood, is a member of House Umber, the uncle of Lord Greatjon Umber, and the joint castellan of Last Hearth with his younger brother, Hother.[3]

Mors is an old man, huge and powerful, with a ruddy face and a shaggy white beard.[4] He wears a chunk of dragonglass in place of a lost eye[5] or conceals the empty socket with a stained white leather eye patch.[4] He wears a cloak made of a snow bear with its head as a hood.[4]

Whilst sleeping by the side of a road, a crow had taken Mors for dead and so it pecked out his eye. According to Old Nan, he grabbed the raven at its feet and bit its head off, earning him the nickname Crowfood.[5] His wife died in childbirth. His sons were killed during the Battle of the Trident in Robert's Rebellion and his only daughter was abducted in 270 AC by wildlings, leaving Mors with a deep hatred of the free folk.[3]

Mors Crowfood, with his brother, Hother Whoresbane, attends the harvest feast at Winterfell, where Mors puts himself forward as a possible match for the recently widowed Lady Donella Hornwood. Maester Luwin promises to pass the request on to Robb Stark, the new King in the North, and Donella, who dislikes Mors.[5]

When Luwin answers Hother's request for longships and men to sail them as protection against the influx of wildlings in the north with the suggestion to strike an alliance with Lord Wyman Manderly, Mors is dismissive, calling Wyman a "waddling sack of suet". However, Ser Rodrik Cassel commands the Umbers in the name of Robb to ally with the Manderlys and they give in, but not without grumbling.[5]

During the harvest feast, Mors and his brother Hother play a drinking game, slamming their horns together hard. When a spinning skirl is started, Mors tosses an embarrassed serving girl in the air.[7]

At Riverrun, the Greatjon tells Robb that his uncles wish to remarry. Robb considers the possibility of Mors marrying a daughter of Lord Walder Frey.[6] Robb is killed and the Greatjon is captured during the Red Wedding at the Twins.[8][9] 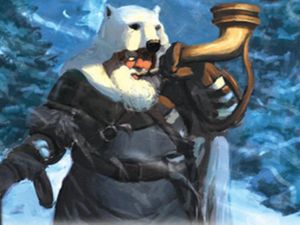 Mors is one of the few representatives of the north to declare fealty to Stannis Baratheon. He agrees to serve Stannis if he is sent the skull of Mance Rayder. Mors also states to Stannis that he will not fight his brother, Hother Whoresbane, who is supporting the new Warden of the North, Lord Roose Bolton. Stannis is advised by some to attack Last Hearth for this, but Jon tells him not to. Hother supports the Boltons only because the Greatjon is a prisoner of the Iron Throne. Stannis agrees and promises to place Mors and his host on the opposite side of battle to his brother.[3]

Mors camps outside Winterfell during a blizzard, his men repeatedly blowing warhorns to cause confusion and to draw out the Bolton host. There he is able to capture Theon Greyjoy and Jeyne Poole, when both are fleeing Winterfell and their captor, Ramsay Bolton, the heir of Roose. Also during this time, the Braavosi banker Tycho Nestoris comes looking for Stannis but meets Mors instead. Mors sends Theon and Jeyne with Tycho and his escort to Stannis at a crofters' village.[10]

Theon reveals Mors asked Jeyne, who is still claiming she is Arya Stark, questions about Winterfell, such as names of servants of the keep, to confirm her identity. Since Jeyne lived at Winterfell for most of her life, she was able to answer them correctly. Also, Mors was only able to muster a few crippled men and green boys as part of his force, as most of the Umber strength had gone south with the Greatjon and the remaining guard had left with Hother.

Mors had his green boys dig a pit trap outside the Winterfell gates. Due to the blizzard, the sentries' visibility was impaired and they were able to do it without detection. When the Freys rode out of Winterfell's gate, several of them fell into this trap. Ser Hosteen Frey lost his horse and Ser Aenys Frey broke his neck and died.[4]

Mors: The Greatjon's the Young Wolf's strong right hand, all know that to be true. Who better to protect the widow's lands than an Umber, and what Umber better than me?


Mors: I have a cure for grief under my furs.[5]
—Mors and Luwin

I shall wed again if His Grace commands it, but Mors Crowfood is a drunken brute, and older than my father.[5]

Stannis: Can this man Mors be trusted?
Jon: Your Grace should have him swear an oath before his heart tree.[3]