From A Wiki of Ice and Fire
(Redirected from Crowns (object))
Jump to: navigation, search 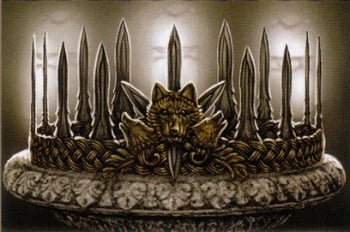 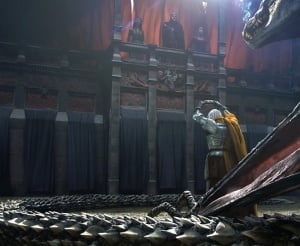 Description: A crown of gold, a slimmer, more feminine version of the second crown of King Jaehaerys I Targaryen.[15] The merlons atop the holdfast at Queenscrown are said to have been painted gold in emulation of this crown, in memory of Queen Alysanne Targaryen who once slept there.[16][17]

History: At the coronation of Aegon II Targaryen, his mother Dowager Queen Alicent crowned his sister-wife Helaena with her own crown.[8]

History: When Viserys Targaryen and Daenerys Targaryen fled to the Free Cities after Robert's Rebellion, they took the crown of their mother, Queen Rhaella Targaryen, with them. Later, in poverty in exile, Viserys sold this crown in order to survive.[18][12] It is not known whether this crown may be any of the crowns detailed above.

Description: The High Kings of the Iron Islands were said to have worn driftwood crowns of varying appearance. Whenever a high king died, his crown would be broken up and cast into the sea. His successor, chosen by kingsmoot, would then craft a new crown with a different shape from driftwood.[33]

Origins: Urron Greyiron established the hereditary Kings of the Iron Islands who wore crowns of black iron instead of driftwood.[35]

Origins: During the War of the Five Kings, Theon Greyjoy states his father Balon has donned the ancient crown of salt and rock.[38] It is unknown if this is the same crown from his first rebellion.

Origins: Euron Greyjoy is said to wear a driftwood crown after being chosen at the kingsmoot.[39] It is unknown if it is the same crown as his predecessor, Balon Greyjoy.

Description: A finger-slim iron band with chunks of black diamond and gold nuggets. It is described as misshapen and ugly.[40]

Origin: This crown is forged at the command of Theon Greyjoy after the capture of Winterfell by his ironborn. Theon, self-proclaimed Prince of Winterfell, observes that the new smith replacing the slain Mikken is capable of little more than nails and horseshoes.[40]

History: Asha Greyjoy wears a makeshift crown to the kingsmoot initiated by Aeron Greyjoy during the War of the Five Kings.[32]

Description and History: The crown of the High Septon of Faith of the Seven is an immense crown of spun gold and crystal that wreathed the head with rainbows when the wearer moves.[41][19][27] There have been two crowns in the course of A Song of Ice and Fire. The first goes missing (and its wearer killed) during the riot of King's Landing.[19] The second is a gift to the Faith and new High Septon from Lord Tywin Lannister, the Hand of the King, and is much taller and more elaborate than the previous crown.[27] This second crown is sold by the Faith, ostensibly to feed the hungry, when the newest High Septon (known as the High Sparrow) assumed the position. This second crown is estimated (by Cersei) to add one and a half feet to the wearers height.[21] 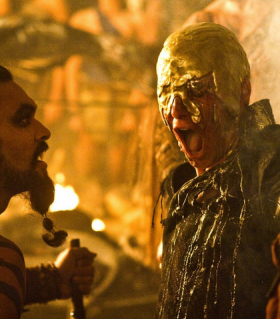 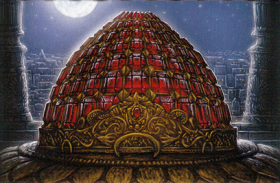