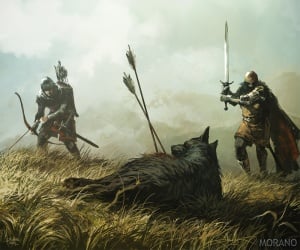 A direwolf is a close relative of the wolf, but larger and stronger. A racing grey direwolf in a white field is the sigil of House Stark.[1]

Direwolves can grow larger than ponies and twice the size of large hounds.[1] In proportion to their bodies, their legs are longer and their heads are larger than normal wolves. Their muzzles are also longer and more pronounced.[2] Possible colorations include grey with yellow eyes and black with green eyes.[3] Albino direwolves have white fur and red eyes.[1] Direwolves are efficient solitary hunters and are extremely intelligent.[4][5] Left to its own devices a solitary direwolf may join a pack of common wolves and establish dominance over it thanks to its larger size.[6][7] The scent of direwolves can agitate dogs.[8]

Like common wolves, direwolves can form a magical bond with a warg.[9][10]

Within the crypt of Winterfell, great stone direwolves sit at the feet of statues depicting the Lords of Winterfell and Kings of Winter from House Stark.[16][17] Robb Stark finds a dead female direwolf with a litter of six pups on the path between Winterfell and the holdfast where Gared was executed. Lord Eddard Stark allows his children to adopt the pups.[1]

Jon: That's a direwolf. They grow larger than the other kind.
Theon: There's not been a direwolf sighted south of the Wall in two hundred years.[1]

A direwolf will rip a man's arm off his shoulder as easily as a dog will kill a rat.[1]

A direwolf is a savage beast. Sooner or later it would have turned on your girl the same way the other did on my son. Get her a dog, she'll be happier for it.[18]

It's said that direwolves once roamed the north in great packs of a hundred or more, and feared neither man nor mammoth, but that was long ago and in another land.[19]

The gods gave us long lives but not great numbers, lest we overrun the world as deer will overrun a wood where there are no wolves to hunt them. That was in the dawn of days, when our sun was rising. Now it sinks, and this is our long dwindling. The giants are almost gone as well, they who were our bane and our brothers. The great lions of the western hills have been slain, the unicorns are all but gone, the mammoths down to a few hundred. The direwolves will outlast us all, but their time will come as well. In the world that men have made, there is no room for them, or us.[20]

Direwolves are based on real world canine dire wolf which went extinct some 9,500 years ago. Historical dire wolves were equal in size to the largest modern gray wolves, but were nowhere near the size of those portrayed in A Song of Ice and Fire.