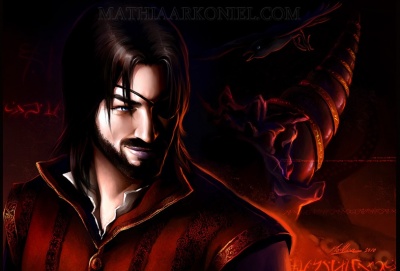 Euron Greyjoy and his dragon horn - by Mathia Arkoniel ©

Dragonbinder,[1] also called the hellhorn,[2] is a large dragon horn with Valyrian glyphs written upon it.[3][1]

The horn is six feet (1,83 meters) long. It is made from the horn of what must have been an enormous dragon. It has a black gleam, and is banded with red gold and Valyrian steel. When touched the horn feels warm and smooth. Its surface is shiny and reflective, though the reflection depicted is somehow twisted. The bands of the horn are covered by strange writings, Valyrian glyphs. When the horn sounds, the glyphs glow red-hot and then white-hot.[1]

Dragonbinder is brought to the kingsmoot by Euron Greyjoy when the ironborn elect a new King of the Isles and the North. Euron claims to have sailed the Smoking Sea and found it amongst the smoking ruins that were Valyria.[4] According to a semi-canon source, however, Euron took it from four warlocks from Qarth whose ship he seized when they went in search of Daenerys Targaryen after the destruction of their House of the Undying.[5]

The horn's noise silences all at the kingsmoot and ends the possible fight between the supporters of Euron's brother, Victarion, and his niece, Asha Greyjoy.[6] The horn's noise sounds like the screaming of a thousand souls and it seems to listeners as if their very bones are aflame and searing their flesh from within.[1] Cragorn, the man who blows the horn for Euron, collapses with blisters on his lips, and the tattoo he has of a bird on his chest is bleeding.

Euron wins the kingsmoot by promising the ironmen that they will conquer Westeros with dragons. When Asha argues that there are no more dragons, Euron tells her that there are three, and he knows where to find them. He does not mention that the dragons belong to Daenerys.[3]

Later, Euron tells Victarion that Cragorn died. Euron says that when a maester cuts him open to examine the cause of death it was discovered his lungs were charred black as soot.[7]

At Deepwood Motte Asha reflects that on Old Wyk her uncle's hellhorn had blown a death knell for her dreams.[2]

Euron gives Victarion the horn when he sends him to Meereen to bring Daenerys Targaryen back to him. He has it with him aboard the Iron Victory. According to Moqorro, the Valyrian glyphs on the horn read, "I am Dragonbinder ... No mortal man shall sound me and live ... Blood for fire, fire for blood."[1]

Bight and baneful was its voice, a shivering hot scream that made a man's bones seem to thrum within him ... It is the horn of hell.[3]

That horn you heard I found amongst the smoking ruins that were Valyria, where no man has dared to walk but me. You heard its call, and felt its power. It is a dragon horn, bound with bands of red gold and Valyrian steel graven with enchantments. The dragonlords of old sounded such horns, before the Doom devoured them. With this horn, ironmen, I can bind dragons to my will.[3]

—Euron at the kingsmoot