Dragonflame or dragonfire is the fire produced by a dragon. The dragon expels its fire from its gullet and out of its mouth.[1] The older and larger the dragon the more devastating its fire.[2] The High Valyrian word for dragonfire is dracarys.[1] 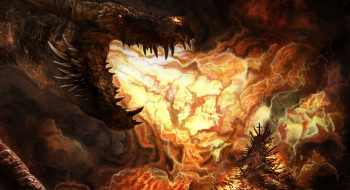 The flames of a dragon grow hotter and fiercer as the dragon ages. The flames of a hatchling can set straw aflame, whereas the flames of much older dragons are able to melt steel and stone.[2] A dragon's scales, which thicken with age, protects the dragon from fire, although it is not entirely impervious to flame. The scales of an adult dragon are stronger than steel,[3] and can deflect crossbow bolts.[4]

Wildfire is said to be a close cousin of dragonflame,[5] though it does not burn as hot.[6]

Each dragon can breath flames in a distinct color, potentially somewhat associated with the coloring of its body:

Furthermore, the fireballs spit by the dragons Silverwing, Sheepstealer, Seasmoke, and Vermithor during the battle of the Gullet were described as "blue and orange, red and gold".[17]

The Valyrian Freehold used dragonflame to make Valyrian steel.[19][20] It was also employed in construction to melt and fuse stone to form dragonstone, as in the cases of the dragonroads and the Black Wall of Volantis.[21]

During Aegon's Conquest, Aegon I Targaryen used Balerion's dragonflame against Harrenhal and at the Field of Fire. Afterwards, the flames of Balerion were used to forge the Iron Throne.[22] Aegon and his sister-wife Visenya used the flames of their dragons Balerion and Vhagar to burn every Dornish stronghold at least once, with except Sunspear and its shadow city.[23]

King Maegor I Targaryen and his mother, Dowager Queen Visenya, used their dragons Balerion and Vhagar to burn several holdfasts in the Reach and westerlands in 43 AC.[10]

During the Dance of the Dragons, King Aegon II Targaryen is severely injured during the battle at Rook's Rest when dragonflame melts his armor into the flesh of his left arm.[17] While attempting to claim the dragon Sheepstealer during the Red Sowing, Alyn Velaryon was injured by burns that covered his back and legs.[17]

Silverwing, Sheepstealer, Seasmoke, and Vermithor descended upon the fleet of the Triarchy in the early days of 130 AC, and burned the ships by spitting balls of fire, "blue and orange, red and gold".[17] Prince Aemond Targaryen brought Vhagar to the riverlands, where he burned numerous villages and castles.[24]

In the House of the Undying, Drogon destroys the indigo heart that stands at the center of the room, and the burns the Undying after they attempt to drain Daenerys's life.[25] 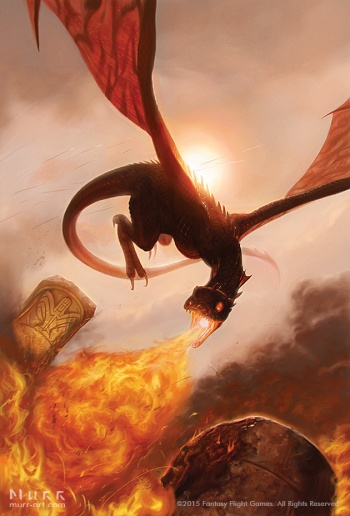 Daenerys Targaryen teaches her fledgling dragons to loose their flame upon her command of "dracarys", the High Valyrian word for "dragonfire".[1]

At the start of the fall of Astapor Daenerys Targaryen commands Drogon to burn Kraznys mo Nakloz. Her two other dragons Viserion and Rhaegal are also unleashed. During the battle all three dragons are airborne, loosing their flames.[26]

Prince Quentyn Martell is mortally burned by Rhaegal while attempting to tame Viserion.[13]

Then the dragon opened its mouth, and light and heat washed over them. Behind a fence of sharp black teeth he glimpsed the furnace glow, the shimmer of a sleeping fire a hundred times brighter than his torch.[13]

The dragon caught one burning body just as it began to fall, crunching it between his jaws as pale fires ran across his teeth.[28]

Longclaw had been forged in the fires of old Valyria, forged in dragonflame and set with spells.[20]