From A Wiki of Ice and Fire
(Redirected from Edd Tollett)
Jump to: navigation, search
"Edd" redirects here. For other characters with the same or a similar name, see Edd (disambiguation).

Dolorous Edd appears to have been born to a lesser branch of House Tollett, as he speaks of being raised in a crude house such as the poorer of the smallfolk might have. Per George R.R. Martin, he was recruited to the Night's Watch by Yoren, who told him women could not resist a man in uniform, leaving out the Night's Watch vow of celibacy.[6] Edd once lost track of his white horse while it was snowing.[2] 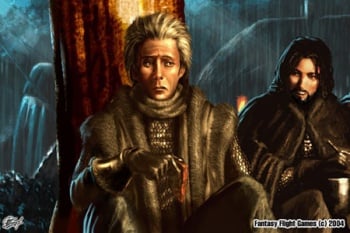 Edd carries on his duties as Lord Commander Snow's steward. He is one of the men brought along as muscle to assist Jon in escorting Janos Slynt out of Castle Black to carry out his duties as garrison commander of Greyguard. Edd and Iron Emmett escort Janos outside for his execution, and Edd fetches Jon a block per his request.[15]