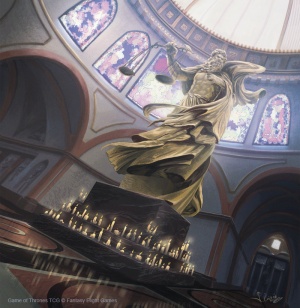 The Father - by Joshua Cairós. © FFG

The Father, or the Father Above, is one of the seven aspects of a single deity. Believers of the Faith of the Seven consider their god to be one with seven aspects, as the sept is a single building, with seven walls.[1]

There is a holy day in the calendar of the Faith of the Seven celebrating the Father called the Feast Day of Our Father Above. According to the septons, it is a most auspicious day for making judgements.[2]

See also: Images of the Father

The Father represents judgement. He is depicted as a bearded man who carries scales. He is prayed to for justice.

Weddings are conducted standing between the altars of the Father and the Mother.

Upon someones death, the phrase "May the Father judge him/her justly" is often used.

Catelyn Stark prays in a nameless village’s sept. The sept is modest and has no statues of the Seven, only rough charcoal drawings to represent them. To the Father Catelyn Stark prays for justice, the strength to seek it and the wisdom to know it. [1]

While standing vigil over his father's body, Jaime Lannister's thoughts turn unbidden to Brienne of Tarth. He wonders where she is. He thinks, Father give her strength. Almost a prayer … but he wonders was it the god he was invoking, the Father Above whose towering gilded likeness is glimmering in the candlelight across the sept? Or is he praying to the corpse that lies before him? He wonders, Does it matter? They never listened, either one. The Warrior had been Jaime’s god since he was old enough to hold a sword.

Our Father Above knows their guilt and will sit in judgment on them all.[3]

The Father's face is stern and strong,
he sits and judges right from wrong.
He weighs our lives, the short and long,
and loves the little children[4]